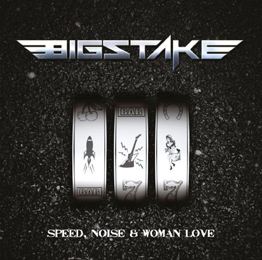 Casket Music/ Copro Records catch-up, part euh...four (for details, see review David J Caron, posted a couple of weeks ago – with an apology from my part for not following the first parts more swiftly, but conditions at work were just too hectic and demanding, and I even suffered a short illness)!

Hailing from Izmir in Turkey, this Heavy Rock 'n' Roll band founded in late 2008 burst open on the national scene of their country following the independent 2010 release of their Concious Crash Songs EP. In fact, the band (then consisting of singer/ rhythm guitarist Erkan Asman, lead guitarist Caglar Özdemir, bassist Mahmet Dolay and drummer Ahmet Duman) has been on social networks, regional radios and even national press since its formation, and it's the positive response to their EP (and the opportunity to tour nationwide) which gave the band members the encouragement to go for a full-length album, which they recorded with Ant Balci at Izmir's own Studio Negative during February and March of 2012. The self-produced album then fell under the attention of the good people at Casket/ Copro, and none less than the famed Nick Hemingway (one of the label's house producers) mastered the material in October of that same year. Originally slated for a late September 2013 release, the album was eventually put out on the street in the UK a month later.

Whether the album did well, I have no way of telling, really...as the band's own website (www.) bigstake.net was apparently no longer active when I checked it. At the label's site, there's talk about a Europe tour possibility, and plans for the band to jump in the studio to record a sophomore album, but I found no confirmation of that at (www.) facebook.com/bigstakerocknroll. I can however confirm the release of a music video for the album's track “Sex & Alcohol”. You can find it posted 07/08/2014 in the “Timeline” section of the facebook page, along with some extra audio tracks (not actual video), that being the only way (as far as I know) for you to listen to some of the album's tracks full-length.

Expect pretty basic Heavy Rock 'n' Roll, with the gently nodding & smiling spectres of the likes of Starfighters and Rose Tattoo (ooh, check the song “Payback” for fitting reference to that!) being rather present. Catchy rhythm guitar, backed by rock-steady bass and drums, is topped by some nice and exaggerated lead guitar, which brings in the spice that makes want for more. But personally, I find the singer to be somewhat unilateral. I won't say he's boring, but he doés sing in rather a uniform way on all the songs (obviously, there's no singing involved on the great instrumental album closing track “Flashbacks”, and its therefore the ideal closer, really), which kinda pulls the combined effort down in my personal rating “system”. Of course, you're entitled to your own opinions, so by all means, dó check out the band. I'd say there's definitely room for growth here, so I'm certainly not discarding this band just yet, because I dó appreciate the high “Party” factor of their type of music, which would be greatly helped by the inclusion of (harmonic) backing vocals. Oh, since the album's release, the band has exchanged the lead guitarist for one Bedir Ulusoy. I hope he can bring in the missing harmonics! At any rate, I'm quite curious as to how this band's sound might evolve...