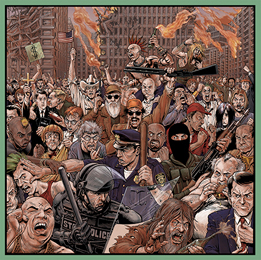 This Austin, Texas based band was started as an “unrelated” side-project by Averse Sefira members Jeff Tandy (bass & lead vocals from its formation until its demise) and Mark Perry (drums in that band since 2001) in 2008 in an effort to revive the Crossover Thrash Metal genre in a legitimate fashion, although Tandy at the same time also stated that Birth A.D. was never meant as a full-time act.

With the aid of guitarist Brian Morrison (whom had played together with Perry in Death Of Millions from 1994 to 2003, and later – from its foundation in 2001 till its demise in 2005 due to two members dying – in Show Me On The Doll), the guys released the 10-track, 21-minute EP Stillbirth Of A Nation in 2009, did some shows, and then returned to paying attention again to their main band which, in fact, was already dying a slow death [founded in 1996 by Jeff Tandy, the Black Metal act released demos in 1997 and 1999, and went on to release the full-lengths Homecoming's March (1999), Battle's Clarion (2001),Tetragrammatical Astygmata (2005) and Advent Parallax (2008, that one on Candlelight Records). In 2003 the band also released a split 7-inch with Secrets Of The Moon, and issued their one and only live album A Union In Blood – Live In Bordeaux. Along the years, AS has appeared in several documentaries, and became one of North America's most acclaimed Black Metal outfits, partaking not only in tours in North America, but also in South America and Europe]. Following the release of their EP, the band did its inaugural live shows on an 11-date tour of Japan in October of 2009. They went on to do support slots with international acts such as DRI, Forbidden, and Rigor Mortis.

For the foundation of Birth A.D., we should by all means look at Tandy's background, whom started his first band Afterbirth at the age of 14...and they played Crossover Thrash before morphing into the Death Metal unit Diabolus (both bands had limited-edition demos, by the way). So, when he started Birth A.D. in late 2008, the project was actually nothing more than the rekindling of an old love. However, what with Averse Sefira coming to its eventual end in 2012, he apparently didn't have to think twice about starting up his side-project as a full-time occupation!

The band is not afraid to name bands like D.R.I., S.O.D., C.O.C. and more three-letter bands (for a comprehensive list, check the band's facebook page) as their prime influence in music-making. In fact, they're proud of it! Expect simple but effectively catchy tunes, mostly played at high velocity, with vocals which are a type of yelling rather than singing, and frequent backing yells coming from the two other guys. As typical with the genre, you can also expect the occasional sample and/or sound effect, socio-politically charged lyrics, and in average rather short songs (although two songs are over 3 ½ minutes long, and therefore of “normal” length, the 18 songs on the album total up to a mere 36:52...you do the maths, eh!?).

For some songs from the album, either consult (www.) reverbnation.com/birthad, or (www.) facebook.com/causeproblems (same audio and video posted!). Sure, it's simple, it's fast, it's no great singing, etc...but in the end it's serious issues packaged in good fun, and it's got a great Mosh-pit mentality. And ain't that what this type of music is actually all about? Oh, by the way, before getting this official release, the album was actually already self-released by the band in 2013!