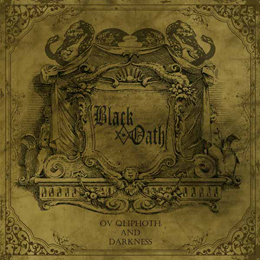 Two years after the acceptable debut full length The Third Aeon (review posted in Summer 2011), which was also released through I Hate, Italian (Milan-based, actually) trio Black Oath return with Ov Qliphoth And Darkness, going on in the very same vein of that debut (and the few mini-releases done in mean time). In the very same vein of their former material, Black Oath bring a form of Doom that is mainly based on melodies of Candlemass, Solitude Aeternus, Count Raven, Saint Vitus or Lord Vicar (though less than on the debut for sure), with some subtle instrumental / structural elements (not the sound, the vocals or the atmosphere, but I’m referring to the riffs and rhythmic structures) from the earliest UK-Doom scene (think: Anathema, My Dying Bride, Winter and the likes) and a big injection of Death Rock-ish tradition à la Black Hole, Death SS or Paul Chain. In essence, Ov Qliphoth And Darkness is not renewing, though refreshing for this combination of somewhat minimalistic Doom-tradition, melodic Epic, and pseudo-Horror Rock. It’s both catchy and obscure, but certainly not as difficult to experience as some other occult colleagues. And in comparison to the debut, this sophomore full recording sort of misses the enthralling waw-effect. Unfortunately there are some tracks that won’t remain-in-mind, and only Witch Night Curse, the title track and Scent Of A Burning Witch are truly outstanding; the second part of the album (or the vinyl version’s B-side, if you want to) is much more impressive than the first half, I think. But in general, Black Oath did an acceptable thing again, and ‘rich’ (for there are hundreds of Traditional Doom-oriented releases lately) fans of the scene will certainly be pleased by this second Doom-epos.