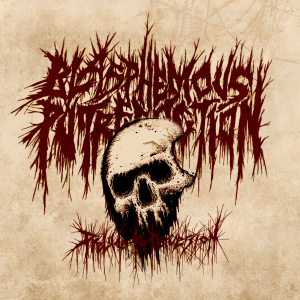 Prelude To Perversion is the debut full-length by the German duo Blasphemous Putrefaction. However, they did surprise (at least, this goes for me) with their EP Festering Plagues at the very end of 2019 (Death In Pieces Records). This official full-debut was recorded by front-man Sebastian ‘Tar Morion’ (drums and noise, also involved with the production / engineering duties) and David ‘Satanic Death Vulva’ (strings and voices) (both of them, by the way, are notorious members in other frenzy projects, such as Decibel Rebels, Goatblood, Genocide or Beltez), eventually mixed by Sebastian ‘Schewi’ Schewell, and mastered at the famous Liquid Aether Studio with Mario Dahmen.

This album was originally released via Dunkelheit Produktionen on compact-disc in Summer 2020 (digipack). Unfortunately I did not have the honor to listen to that stuff back then. But hurray, for the very same label recently decided to have this stuff reprinted on vinyl, i.e. 300 copies on ‘normal’ black vinyl, 100 ones on red long-player stuff, and another 100 copies as tomb-dust vinyl. …which gave me enough reason to focus once more on this specific recording.

What Blasphemous Putrefaction bring with Prelude To Perversion is a thirty-three minutes-long assault on the listener’s brain / ear-drums / endurance / consciousness / whatever. And with such title, one cannot but expect a handful of sweet elegies dealing with kids playing in a meadow filled with daisies, while a soft breeze caresses their untouchable ignorance and happiness. You’re not convinced?

Well, believe me that I always speak the truth. Song-titles like Blasphemous Ritual, Leprous And Cancerous, Blooddrunk Skeleton or Epidemic show that I am right, not?! Indeed, these guys do perform an extremely squalid, sordid and obscene form of old-schooled Death Metal, beastly rooted in the tradition of the most greasy underground of Old. The better part of this stuff is speed-up, uncompromising and merciless in both song-writing and execution. Fast riffs, thunderous drum salvos, muscled guitar solos; the energy defines excitement, vigor and invincibility. It’s like an avalanche, a pyroclastic eruption flooding all over the innocent audience. But damn, the performance shows such mighty craftsmanship on several levels.

Let’s take the guitar leads and solo-work, for example. Listen to the end-sequence of Splattered, for instance, to analyze the ingenious melodicity that lurks through the colossal and destructive structural patterns. Or the many fingerspitzen-like solos, thrashing and still intoxicating. Another characteristic element is the injection of a very explicit Doom-approach. More than once, Blasphemous Putrefaction introduce slower passages, smoothly and organically penetrating that vortex of deleterious aggression. The jolly (forgive me for using this silly description, but it fits) thing is that those doomed extracts are at least as overwhelming and atrocious as the fast / blasting sections.

Of course, besides the skilled abidance of well-balanced string-parts and monstrous drums / percussions, one cannot ignore the importance of Satanic Death Vulva’s throat. You have ‘dirty’, then you have ‘greasy’, and then there is the purely contaminated voice of this ‘chanteur’. It’s like puking out his belly, vomiting acid, breathing brimstone, sucking all air to leave the listener asphyxiated.

The equilibrium of all ‘ingredients’ has been coordinated with accuracy and equilibration. That gets consolidated by the sound-quality on Prelude To Perversion. At the one hand you do experience an equally-balanced mix, in which all instruments / voices play their role. Lead and rhythm instrumentation, strings and percussion; none of them gets ignored or inferiorized. But at the same time, the final sound exhales the precious untidiness of the Old School too. Imagine this material being recorded with a poppy sound; it would sound hilarious and fake. With a sardonic smile on my (pretty) face, I can say that the sound indeed pays tribute to what this recording is supposed to be: uncompromising and intolerant. Mission accomplished!