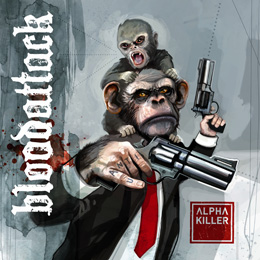 In their biography, German hardcore band Bloodattack says, although their keynote is based in hardcore punk, they wanted to insert their metal roots in their music.
On the new record Alphakiller, which refers to their anti-fascistic manifest, they certainly succeeded to do so. The riffs sound very brutal and cold, but the beats make the balance yield over to the hardcore sound. Most of the songs are sung in English, but still they chose to manifest their roots as well by writing songs in German, such as Gott Aus Dem Viereck. One of the best songs on the album is the second one, Aversion. At one point, you think you're listening to a thrash metal band as Exodus, at another point, you think it's the hardcore band Integrity you're hearing and at even other points, you might think it sounds like Nasty. Still, it's Bloodattack you're listening to.

On Alphakiller, Bloodattack proves that, if you have enough dedication, you can still make great hardcore music in these tough times. Let the DIY reign!