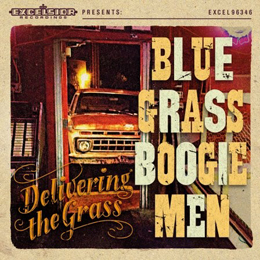 And now, for something completely different...nah, nót the Monty Python's Flying Circus show, but a return to Roots music, more specifically to the Bluegrass music of the Dutch quartet known as Blue Grass Boogiemen, who've actually been at it since 1990, toured both Europe and the US from corer to corner, and back again, and in the process became the “Dutch Ambassadors Of Bluegrass”!

The quartet is somewhat diverse though, also playing a mixture of Rockabilly and Country as the Hillbilly Boogiemen. In fact, the band's first recordings (which were released only as a self-titled cassette tape) were under that name. Following a twosome of singles, the HB came out with their first full-length Live At The Pumpkin's, before joining up with fiddler Joost van Es and singer Cor Sanne for a joint covers venture under the monicker of Grand Ole Country, which spewed forth the Time album. The HB then returned with an album of originals entitled Rockin' & Cloggin', before BGB finally came out with their debut full-length, which got the title Who's Afraid Of The Boogiemen?, the material of which consisted for the largest part of covers. The same can be said of the ensuing BGB album Hits Of Hank Williams which, as the title suggests, was a covers album of songs by that album. Fr their 3rd album, BGB again chose for a live recording of cover songs, which they entitled Live At Café De Stad.

For the band's 4th release, the band opted to go for original songs for the most part, filling the whole with only a handful of covers. One thing has to be said about BGB: they play only acoustic instruments, which are recorded in one room around one omni-directional microphone. How about keeping things real, eh? 16 tracks on the album, the musical direction for the most part is Bluegrass (the couple of exceptions gearing more towards Country - and in one occasional even towards Country Blues – check the song “Another Man Done Gone”, which also displays the use of mouth harmonica – from which Bluegrass was derived, you know!?). What makes Bluegrass that special? Well, it's the combination of instruments, really, with banjo and bass being the basis upon which mandolin, regular acoustic guitar and/ or fiddle may bring additional layers. There's a sort of complexity to Bluegrass music (due to those different layers, you know!?), but underneath there's also a melodic simpleness, and in the case of BGB (as with many Bluegrass bands, by the way), there's also an harmonic backing of the lead singer, whose lyrics will usually deal with the stuff of live everyone has to deal with, such as heartbreaks, loneliness, desperation, and death. Musically speaking, Bluegrass is an ideal type of music for the more experienced (and eclectic) music fan to take some time off from the more aggressive types of Metal or Hardcore. I mean, I've always found the music very soothing...at least for a while!

Unless there's a page for the album at one of your trusted online sites, there's no music off the new album available (at the time I checked), but at the band's official site (http://) hillmen.home.x4all.nl, you can find mp3 previews of songs on the older albums (in the “Audio/Merch” section)! Check it out, if you fee so inclined or, if you've only continued to read thus far because you like my style of writing...check it out anyway, as you might well be surprised in a positive way!