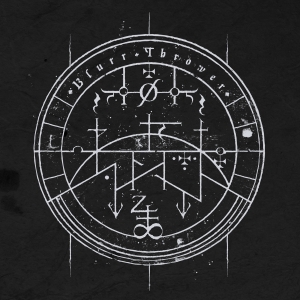 Totally new to me, Blurr Thrower seems to be a mysterious one-(wo)man outfit from Paris, France. With the two-tracker Les Avatars Du Vide (‘avatars of the void’), Blurr Thrower did debut last year (in July, more exactly) independently and digitally (cf. their Bandcamp-page). Shortly afterwards however, Gérald and Blandine from Les Acteurs De L’Ombre Productions contacted the human being behind Blurr Thrower to give this project the opportunity to have a better, more professional promotion at the one hand, and a physical release at the other. So, as first release on this label for 2019, we salute Les Avatars Du Vide.

The album is ‘taking shape from personal neurosis, fears and anxiety’ and the project ‘aims to exhume the secret ether from the meandering of the Human soul’ via two very lengthy tracks. Everything (both music and lyrics) was written, recorded, mixed and mastered by the guy / woman behind the band, who claims to find inspiration within the so-called Cascadian scene. The album needs several listens before you get the whole picture (extended compositions, as mentioned, respectively 18:59 and 17:31 minutes!), but once you get through the whole concept, you will adore the depth, the intensity and the emotional aspects that define this album.

Les Avatars Du Vide starts with Par Delà Les Aubes (‘beyond the blades’) (indeed the lengthiest piece out of two, as mentioned in the former paragraph). The piece opens in a tranquil manner, with a droning guitar wave and acoustic accompaniment, yet very soon, first a harsh and militant drum riff, and then eerie, raw electric guitars join. Immediately, the initial calmth fades away, making room for a grim, cold sphere. Slowly everything evolves, progressing with the addition of dark strings, sore vocals and mesmerizing synth lines. It mingles the heaviness of (Cascadian) Black Metal, a dreamlike atmosphere, courtesy of the ominous and floaty riffing and hypnotic keyboards, and an oppressive darkness, an obscure and, at the same time, majestic elegance.  throughout the whole track, there’s a permanent interaction in between coherent yet distinctive chapters, also varying in tempo and structure. In a sense, the technical side is quite straight-forward, performed with a malignant attitude and a characteristically execution. I, for example, adore the drone intermezzo half of the composition, with these fine acoustic and electric guitar melodies (cf. the opening sequences of this piece), acting as a glue in between the dreary Shoegaze / Post-inspired first half and the strict intensity of the second half. The hymn ends with a two-and-a-half minute long sonic landscape, a vision of a vast, empty, lifeless area, empty and lost in nothingness.

The second track, Silence (which is French for… indeed, you smartass) starts of in a mostly malicious, brutal and aggressive way; a sonic attack with fast rhythms, thundering drum patterns and those Arctic and wretched, even tortured screams. Like an overwhelming Atmospheric Black Metal battering ram, Cascadian, Nordic, timeless and even caressing the unphysical border of the DSBM-scene. The bass passages are more on the foreground this time and the harshness overwhelms the whole atmosphere, clothing it in a veil of discomfort, dissonance and disarray. Here to, at about half of the track, an intermezzo adds something unique once again. This time, it’s rather an occult and mystic mixture of Dark Ambient and Drone, with noisy distortion, creating a mind-transcendental experience in the listener’s brain. The whole piece is built around a dynamic and pride conviction, bleak and freezing, yet at the same time, rich and warm.

My sole ‘problem’ is the sound quality. This one, for what it is worth, could have been adorned little more, with a more prominent equilibrium in between all string elements. No, I am not asking for a clinical production, of course, but the background noise and the lack of that fine twitch that makes everything little more oppressive could have been worked out little more. But hey, this isn’t but a minor detail, for Les Avatars Du Vide is another adorable release on France’s finest Les Acteurs De L’Ombre Productions.