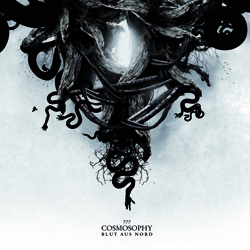 Third part from the 777-triptych, the calm after the storm…

For any more information about the first part (the second had never been sent to our favourite webzine’s headquarters, and it has not been reviewed by undersigned), or other (evidently superb) Blut Aus Nord-releases: check out the review section. Cosmosophy is the last part of the 777-saga, different again, of course, but so are, as a matter of fact, all Blut Aus Nord-records, as you might know. Recorded again at his Earthsound Studio, Frenchman Vindsval surprises again with an innovation beyond expectation. Several elements strike me.

First of all: the vocals. It was somewhat confusing, when hearing rather clean, melodic, melancholic chants with a very limited tone variety. The second Epitome on this album, by the way, even includes rather Hip-Hop / Rap-alike spoken words, can you imagine… Very sporadically there are some grunts and screams, yet the main vocal additions (and this album, and that’s not new, is mainly instrument-based) are those melodious choirs.

The music, i.e. the riffs, the rhythm and the tempo, is rather Funeral Doom / Old School Doom-Death / Goth-Doom-Death related than Black Metal-oriented, and firmly focussing on depressing rather than aggression. Besides, the album implements elements from Trance / Industrial / Noise at the one hand, and Goth Rock / Dark Wave at the other (the latter especially has to do with the sound and, of course, the clean vocals). Unfortunately, the whole sounds too flat and too linear in comparison to the past; it lacks of massive ‘balls’ whatsoever, and that’s not what I was expecting, honestly. Yet at the same time, there are many excerpts throughout the album that indeed are very interesting; we’re still talking ‘bout Blut Aus Nord, not?!

Personally I am a little confused, and I do prefer the darkest passages, i.e. those who are the most Black Metal related (without the screams for sure) or the most obscure Funeral / Doom / Death parts (going for the instrumentation especially). I guess you might compare this stuff to later Void Of Silence rather than any former Blut Aus Nord release (yet once again: the distinctive approach of this project IS characterising Vindsval’s creativity in every single aspect!), but in spite of a predominating confusion I’d like to focus on Creativity and Art???

And when trying to give an answer on the (very important) question: is Cosmosophy a worthy occlusion on the 777-trilogy: well, actually, and let’s skip any narrow-minded crap: it surely is! Up to the next experiment!