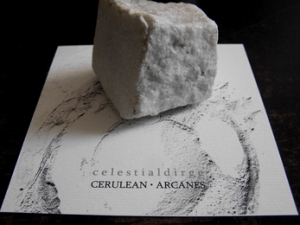 I have always appreciated two aspects of French label Distant Voices; the projects signed to their roster, and the physical aspect of each single release. When it comes to the first, the projects, well, I’d like to refer to the reviews I wrote for Arbre, Misery, Brouillard or Scars From A Dead Room. Without exception, all of them do please undersigned’s ear drums and mental state. As a matter of fact, this label was formed two and a half years ago to release Black Metal and Ambient (or better: bands or projects that sort of create a combination of both related genres – indeed, aural happiness for the unhappy ones), and the projects signed on their roster do know how to perform this kind of Sonic Art with conviction, craftsmanship, adoration, pride and professionalism.

The second aspect I was referring to, the ‘physical’ thing, as to do with something that characterises this French label, founded by Thomas Bel, and assisted by Marie and Anna M. More specific, it means that each single thing gets released in a highly limited edition, yet totally handmade with the best materials available.

Of course it isn’t different when talking about Distant Voices’ eighth release, the debut EP / CD-r of North-American duo Celestial Dirge. Once again, the whole package is unique, within black packaging and including two inserts, printed on 210-gram ‘grain’ paper. Evidently, this stuff is extremely limited, i.e. in an edition of 58 copies only (and since I have mine, there’s one less left for you…). 15 copies are slightly different, i.e. hand-numbered too (so is the other edition), with a silver CD and somewhat different artwork / lay-out. It has been done, by the way, by Anna M. this time.

And now the ‘sonic’ side of this release. As mentioned before, I have never been disappointed by any material on Distant Voices when it comes to the quality of song writing and performance. The sound quality, however, was beneath acceptance, sometimes, and that was a pity. In this album’s case, the recording was done in November 2013 with some additional and re)recordings in November 2014, and the result was mixed and mastered in very early 2015. And actually, the production is quite all right. I won’t say that this album comes with the most professional mix I’ve heard in years – because that wouldn’t be true (and my mother always told me not to tell lies, you see…). But actually, Cerulean Arcanes sounds low-profile but still forceful and complete.

The Ep consists of two long pieces that perfectly fit to Distant Voices’ roster. The first composition, called -33, has a total running time of seventeen minutes and opens with quite a sober introduction, being a one-tone monotonous sound that slowly gets louder. Only after a couple of minutes, there seems to appear some ‘melody’, finally accompanied by a distant drum beat, far away. But after about four minutes, things start getting seriously interesting. Softly floating Ambient synth lines and almost absent drum beat patterns create an atmosphere so chilly and hypnotic, and this goes on for a couple of minutes. And then, after almost seven minutes, a first glimpse of horror shows up. Nihilistic guitars and artillery drum patterns (clearly done by a drum computer instead of organic drumming – but maybe you do not care) appear, joining forces with the creepy keyboard melodies, then joined by a mesmerizing guitar lead (mind the sound quality), and building up to some post-apocalyptic spiritual soundtrack. Step by step, -33 evolves and grows, reaching bigger, fatter proportions of Aural Obscurity. Despite its long-stretched and nihilistic-minimal attitude, this piece catches the listener by accompanying him (or her) throughout unexplored dimensions far beyond earthly safety. It builds up, minute after minute, in order to explode in a grandiose finale of, well, what this song did introduce whole the time.

The second track, called HVR, clocks just over nine minutes. This one too is an instrumental piece with quite the same ingredients. But the main difference is that this track does not start that minimalistic. The drum computer beats are more pronounced, and the focus lies on synth lines rather than blackened guitar riffing. HVR is more ‘rich’ in sound for sure. The first part and the second half are slightly different, as if it are two different pieces brought together (yet still organically related), with the second one especially being less static or droning.

What I do appreciate, but it rather goes for the label than the musical project, is the eyes wide open vision. Celestial Dirge shamelessly fit to Distant Voices’ curriculum vitae, but they are different from all other entities too. But why not? Satanath, Weltfeind, Aesthetic Death and several other labels have done quite a comparable thing by releasing material that did differ and, at the same time, perfectly followed the spirit, the core business of the label. With this instrumental release, Distant Voices do very much the same. I would warn you that this release is a ‘you like it or you do not’ recording, but I am, once again, impressed!