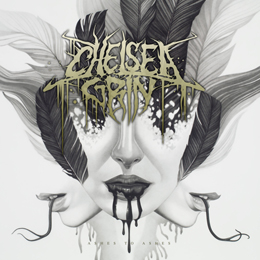 Dàmn, I lóve this band's most recent release...in fact, I dare even declare that it's one of those rare exceptional albums the seasoned voluntary (meaning: not paid for all his hard work) music journalist comes across, which entice him to continue to waddle through hundreds of middle-of-the-road and occasionally mediocre stuff. The thing that keeps him goin', what!? Okay, enough personal issues, let's get down to the business of presenting this ultra-fine band to you!

Originally playing a Deathcore-styled Metal, this Salt Lake City based band was founded under the monicker of Ahaziah in 2007, featuring lead singer Alex Koeler (also known from Hearts And Hands), guitarists Chris Kilbourn and Michael Stafford (the latter also providing backing vocals), bassist Austin Marticorena, and drummer Andrew Carlston. Through their MySpace page, the band released a couple of songs early on in their career, then swiftly went forth to write the material for their self-titled EP, which was first streamed and released online through iTunes , and then released on CD through Statik Factory Records on July 27, 2008 (and I'm not even certain whether that wasn't already under the band's current name – the name change occurring somewhere in 2008). A few small West Coast tours followed the release, but then the bassist left for personal reasons, the vacant place to be filled in only temporarily by one Jake Harmond in early 2009.

You see, 2009 would turn out to be the year of big changes for the band. For starters, they kicked out the drummer, with Kory Shilling taking over those duties. At the same time, one Davis Pugh was recruited to take over the bass. In April of that same year, Shilling was replaced by the returning original drummer, and original guitarist Chris Killbourn left the band to start his own record label, Matchless Records. Soon after, Harmond returned to the fold to take over Killbourn's position on a temporary basis. The guys then started writing new material, but decided to change their musical course, switching Davis Pugh into the position of second rhythm guitarist (leading to a 3-guitar attack!) after recruiting David Flinn as their bassist. Following a short week-long Canadian tour in June (supporting The Agonist, A plea For Purging, Arsonists Get All The Girls and Attila – the latter Statik Factory labelmates), Harmond decided to become a full-time member for CG, and the band came in touch with representative of the Artery Foundation. The latter immediately booked studio time (at Lambesis Studios in San Marcos, CA) for the band in August, to record the debut full-length Desolation Of Eden, with production from the studio owner Tim Lambesis (known also in his capacity as singer for the band As I Lay Dying). Only a week before the recordings, Pugh was ousted from the band in favour for Harmond's former Hermione bandmate Dan Jones. While in the studio, the band signed a deal with Artery Recordings.

Soon after the recordings of the debut full-length (which included a new version of “Cheyne Stokes”, a song already featured on the band's EP), CG went on its first full US tour with Dr. Acula, American Me, and Attila. The album, released February 17, 2010, was well-received, and selling 1,500 copies in its first week gained it a #21 position on the Billboard Heatseekers charts (while also peaking at #24 on the Billboard New Artist chart), as well as getting featured and praised by Alternative Press, several newspapers from the band's home state, Utah...and many other magazines both nation and worldwide. Obviously, the success meant CG was now getting a higher profile, and better tour and promotion offers. During the band's sold-out headline show at The Boardwalk in Orangevale (CA) on 04/06/2010, a video was shot for the song “Sonnet Of The Wretched”. While on tour with Iwrestledabearonce, Eyes Set To Kill, The Chariot, and Varina, abut a month later, the band recorded a second music clip (for the track “Recreant”), this time on a set in Northern California. It was released January 13, 2011, on the Metal Injection show. During the Thrash And Burn tour during August, while the band was in Richmond, Virginia, Koehler got seriously injured (fracturing his jaw in three places), causing the band to drop off the tour's last week. With commitments already signed for a two-week tour in September with Blind Witness and Attila, the band temporarily replaced its lead singer for Adam Warren of Oceano.

Somewhere in between, the band confirmed rumours that they would be entering the studio in January 2011 with renowned producer Chris “Zeuss” Harris, and in June 2011 dropped My Damnation as its title, wit July 19 as its release date. Prior to the album's release, Artery Recordings issued two singles, starting with the album title track on April 17 (a music video for it would be produced weeks after), following that up with the Phil Bozeman featured (of Whitechapel – guesting on someone else's material for the first time in his career) “All Hail The Fallen King”. In support of the album, CG first toured with Emmure and Attila, and then joined the All Stars Tour (featuring those same bands and, among others, After The Burial, Born Of Osiris, and Motionless In White). In late 2011, CG was confirmed to participate to the entire Vans Warped Tour 2012, and at the same time announced plans for the release of the 5-track EP Evolve.

In December 2011, CG's lead guitarist Michael Staffort, decided to leave the band (leaving Koehler and Carlston as the only remaining founding members), citing not being able to bear touring anymore as one of his departing reasons. His position was picked up, on a temporary basis, by Born Of Osiris guitarist Jason Richardson (also formerly of All Shall Perish). A mere week later, he was kicked out of Born Of Osiris, and changed his position within CG from a temporary to a permanent status. His first recorded feat with the band would be for the June 2012 released EP Evolve, which was preceded by the single “Lilith”, culled from it. Toward the end of November, Andrew Carlston was again ousted from the band, and one Pablo Viveros entered the fold as the band's new drummer, while also picking up the role as backing vocalist. He had to pick up very swiftly, as CG supported Motionless In White on their headlining The Infamous Tour during November and December, a very successful tour which took the bands throughout North America, and found them play at several sold-out venues.

For CG, touring continued into 2012, starting with a North American headliner tour during January, which was followed up with the band's participation to Australia's Soundwave Festival during February (with the band also partaking in 2 “sidewave” shows with Of Mice And Men and While She Sleeps). March then, found CG entering the second leg of their headline touring of the US (tagging along Attila, Betraying The Martyrs, Within The Ruins and Buried In Verona), and during April and May they supported Emmure on their European tour (marking CG's third visit to our continent), and followed that up by playing on the All Stars 2013 tour (alongside Everytime I Die). In June the band released a cover of Korn's “Right Now”, which was producer by their guitarist, Dan Jones. That same month, they were announced as main support on the Australian Brothers In Arms tour (also featuring the Amity Affliction, Stick To Your Guns, and In Hearts Wake), taking place in October that year. During the Summer months, CG performed at several European festivals. (note : the info above was taken & re-written from the band's page at Wikipedia)

In late November, the band entered the studio to record their third full-length album in co-production with Diego Farias (whom might be known to the reader as having previously worked with Animals As Leaders, Volumes, and Stray From The Path). It became the epitome of the evolution the band went through since the beginning of their career. Indeed, the first releases were primarily described as Deathcore, but on the 2nd full-length CG already partook in some experimentation, adding Doom and Black Metal influences on a couple of songs (also lyrically). On the band's EP Evolve then, strong elements of Progressive and Symphonic Metal were included in a couple of songs. Today, the elements of Black Metal, Symphonic Metal and Progressive Metal in the band's music can certainly not be denied, what with 'em running through each other throughout the album! As influences, the band itself cites the likes of The Black Dahlia Murder, Deftones, Suicide Silence, Whitechapel, Behemoth, Megadeth, Slayer, The Agony Scene, Bleeding Through, Atreyu and Bury Your Dead as its influences, but quite frankly, if you ask me, they do something to all those influences, which makes those pale in comparison with the outcome!

If you ARE bent on labeling a band's music, you might put CG in the Progressive/ Symphonic Black Metal corner, but that would be putting the band down somewhat...I mean, làbeling 'em...because they really are a force on their own! The band's new drummer is really the most versatile backing singer I've come across in quite a while, alternating his voice from something which is only a few notes above the lead singer's Blackened screeches, to rather deep growling, with some clean parts in between, and some other “ruf” vokills as well...all along performing his admirable role on the drums! The guitarists are another natural force, with several parts in the music featuring double leads, or incredible melodic lead backed by seemingly chaotic down-tuned rhythms, or one of the guitarists exchanging his instrument for a keyboard from which he, depending on the needs of the track, will distort the sounds of piano, exhilaratingly fast-played keyboard lines, or great atmospheric string sounds! Put it all together, and I can tell you that I've found my one album which excels all other things released in 2014, independent of genre  (and the reader will know me for being quite eclectic). In other words: my top of the list of favourite 2014 albums!

To find out how yoù feel about the band, I suggest that you check out either the audio posted in the “Bandpage” section at (www.) facebook.com/ChelseaGrinMetal, or the videos compiled at the band's page on (www.) spirit-of-metal (“Playing With Fire”, “Clockwork”, and “Angels Shall Sin, Demons Shall Pray” for songs off the new album). During February, the band will be touring Europe again with Germany and the UK as the main countries, and closing off the tour with a few Russian dates...but also with a show at Belgium's own De Klinker in Aarschot, on Feb. 19. Quite frankly, I think that day the fans will be listening outside the over-capacity filled hall!