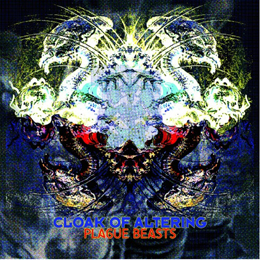 Mories is the ‘artist name’ of Maurice de Jong, which is one of the most grim-thinking Dutch guys within the sonic netherworlds. He’s known from tens of solo-outfits and a couple of collaborations, with Gnaw Their Tongues, De Magia Veterum, Aderlating and Seirom being the best known ones, I think. Under the moniker of Cloak Of Altering, he did record and release some very impressive stuff before too. Now Mories comes back with the third album under the Cloak Of Altering banner, which is the first for Crucial Blast. It’s called Plague Beasts (sounds happily positive, not?!) and consists of seven elegies that last for thirty seven minutes.

Plague Beasts, the opening track, immediately shows the progression and the identity of this specific project. It’s Black Metal, yet it’s not. It’s Industrial, yet not either. It’s Electronic Noise, and for sure it is not. It is all of this, and even more, yet at the same time nothing alike. Damn, this opening ‘song’ (hehe, what’s in a word) combines all those elements within a most frenzy, psychopathic and schizophrenic way, rather focusing on dissonance and disturbance than on structure and evidence. The whole sounds defragmented and utterly mechanical, with ferocity and chaos as thriving head chapters.

The energetic side is beyond expression, I mean that the whole album blasts (read: it is like a crucial blast, haha), no matter if it deals with a lightning fast or a blasting fast piece. It gets injected by electronic noises, dissonant riffing, industrialised blast-eruptions and schizoid, psychopathic hooks, breaks and loops, surreptitiously raped by weird synth schizophrenia, secret trancelike Electro-mechanics and malignant / malicious computerised grind-assaults. The somewhat ‘symphonic’ elements from the former releases have been replaced by trippy-electronic madness, going more into extremes than ever before. And everything gets highlighted through the last piece, Altering Forever, which impresses, suffocates, devastates and impresses again.

Imagine elements from Cryptic Winds, Mysticum, Aborym, Diabolos Rising, Blacklodge, early Void Of Silence, Metraton, Spektr, DHG, Diabolicum / Bloodline, Ephel Duath or some of the projects Mories is involved with, and it might give you a (distant) clue.