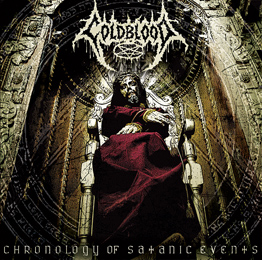 The history of this Rio de Janeiro, Brazil-based band goes back to 1992. Coldblood were formed by Marcus ‘M.Kult’ Couttinho and some friends, and they recorded one demo (Terror Stench) before splitting up a first time. In 1999 the band reformed, yet once again for a short period, and with just one single demonstrational recording. In 2005, Coldblood was reborn for another time, but this time things seemed to work out well. The band recorded a first album in 2007, called Under The Blade I Die, followed by some EP’s and splits, but most of all: lots of line-up changes.

Anyway, Coldblood recently recorded their second full length studio album, Chronology Of Satanic Events, with next line-up: drummer Marcus V. ‘M.Kult’ Couttinho, guitarist / vocalist / bassist / lyricist Diego ‘D.Arawnn’ Mercadante, and lead guitarist Artur Cirio. The latter, for your info, also left the band in mean time. This is quite an impressive trio, for the members are or were involved with top-acts like Unearthly and Mysteriis, amongst others. The stuff gets released via three labels, i.e. Brazilian Distro Rock and Attitude Headbanger’s House, and American (top) label Metallic Media.

Coldblood perform Death Metal; it’s that simple. They do play the purest form of Blaspheme (or Satanic, if you want to) Death Metal, inspired by both the South and North American scene. It’s harsh, fast-forward, uncompromising and violent, yet with a great technical execution and a cool sound, meant for mad minds with a head-banging attitude, and a passion for the purest definition of timeless Death Metal. It lacks of originality, but it’s up to you to make out if that’s a ‘problem’ or not. I do not care. The only issue I do have is the production, which is way too polished. That’s of course nothing but a personal opinion, but I would prefer to have a rawer, less clean sound, because that would strengthen the morbid sphere of this kind of material.

In short: if you appreciate the likes of Deicide, Morbid Angel, Immolation, Hacavitz, Vader, or fellow countrymen like Imperious Malevolence, Rebaelliun, Krisiun, Abhorrence etc., then Chronology Of Satanic Events is a must. It’s that simple…