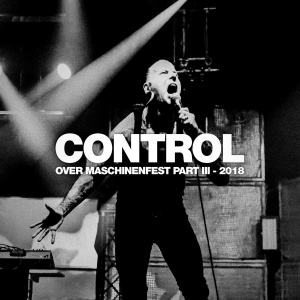 [a short one for being sold out – at least the tape-edition of this remarkable live registration – yet still worth being promoted anyhow, and in support of / respect for Thomas]

It is useless to talk about the mighty Maschinenfest party; probably (one of) the best festivals within the Noise / Ambient / Electronics / Gospel / Industrial genres (it’s a game: delete what does not fit). Throughout many years, some of the best acts within these genres did perform on this live event (at Oberhausen, Germany). And many of these performances have been registered and, eventually, released in a digital and / or physical format via the fine Berlin-based label Raubbau.

This goes, once more, for the performance by Control in 2018. Thomas Garrison, the guy behind Control, did perform different times on the Maschinenfest festival (I guess he’s the most regularly returning artist, actually). And once again, this live incorporation from October 19th 2018 will be (or better: has been) released for the faithful audience in another mighty partnership of Raubbau and Pflichtkauf, under the protecting vision of Ant-Zen. This specific release comes on cassette edition, with three tracks on each side of that tape. I think that physical edition is sold out in the mean-time, but it is never too late to experience this marvellous stuff anyway (the possibility to order the digital edition: see link below).

Even-though the six pieces do come from different recordings written and recorded through different periods (if I’m not mistaken, not all of these compositions had been officially released yet at that very moment), this performance was created so specifically, as if the whole event was generated as one huge, cohesive, organically-sounding totality. The rough yet well-balanced mixture of (Power) Electronics, (Death) Industrial and Dark Ambient / Drone sounds ultimately raw and noisy, but well-structured and dexterous in nature. The whole gets covered in a veil of doom and vexation, seen from its most refined definition – a display of dismal revulsion and delicate fairness at the very same time, if you want to…

Harsh electronics, repetitive beats, barbaric growls, disturbing ambience, obscure drones, psychotic noises and ominous din are fluently canalized into a wall of sonic majesty, leaving no room to unbend from aural torture. But in a masochistic way, this form of sensory qualmishness works meditative and sanative too. This monumental and monolithic experience permanently twists and disturbs, it attracts and repels gloriously at the same time.

PS: strength and a speedy recovery to you, Thomas!