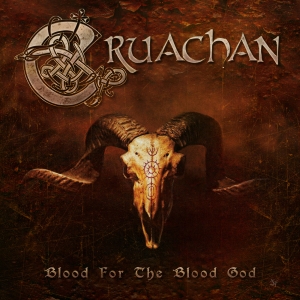 Irish top-act Cruachan needs no introduction anymore, I guess. They are active for more than two decades in mean time (with a brief break), and I do follow them as from the release of their first full length, Tuatha Na Gael. More info: search the net…

Blood For The Blood God is the successor of 2011’s Blood On The Black Robe, and the second part for the Blood-triptych. For the review I wrote for this Candlelight-release (I mean the first part of the trilogy), you must check the update of April 24th 2011 in the Archive-section of Concreteweb. Blood For The Blood God lasts for one hour and it is, once again, a great combination of Pagan / Black Metal and Celtic Folk Music. Both genres (I know that it is little narrow-minded to mark these two styles so strictly, but it’s an impression I want to create) act separately from each other in some songs, but most of the time they are sort of mingled together. Result: variety, once again!

As a matter of fact, this album is a very logical successor of the first part of the Blood-trilogy. An impression follows right now. Some pieces are fast and furious, others integer and sober. There is still the use of violins, flutes, acoustic guitars, and even instruments like bag pipes, bodhrán, mandolin, piano, cello, bouzouki, whistles etc., as well as some female voices (Barbara Allen). Some parts are bombastic and grotesque, others very folksy-traditional, or rather catching and rocking. Besides the additional female vocals, the main vocals by band leader Keith Fay are enormously varied too: clean and melodic, then again yelling or harsh screaming, and everything in between. And so on, and so on… I think this album might be the heaviest to date as well, or at least as intense and heavy as Blood On The Black Robe, with that very same equilibrium of the newer material (Pagan, Folk-Lore) with the more blackened roots (Tuatha Na Gael). Also when it comes to atmosphere and emotionality, Blood For The Blood God continues the path of its predecessor.

It’s rather easy for me to conclude this way: if you like Blood On The Black Robe, then you will easily appreciate this new Cruachan epos too. It’s that simple!