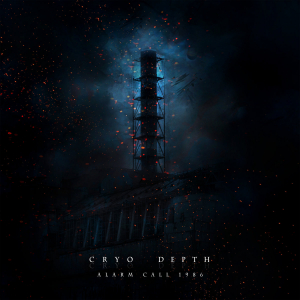 I did start this review, for myself, tens of times before, and I did delete my introduction time after time. I wanted to focus on the destructive nature of ‘us’, the human kind, and as you might know, ‘we’, that ‘human kind’, is a disaster for Mater Terra in all its aspects. But then again, I didn’t feel like going into that matter too deeply this time.

You see, an example of our failures might be a tragedy that happened almost thirty-five years ago, when one of the biggest nuclear disasters took place: the Chernobyl power plant explosion, which did have consequences for quite a big part in the former USSR (Soviet-Union) and Europe, up to the most western regions of that continent. But here too, I am not going too deep into that catastrophe, for it is another blame for us, ‘people’, or at least a part of it. Let’s sing a lullaby about peace and love all together right now, with daisies in our hair, and the smell of incense (and other green stuff) smoking around our beautiful faces, to forget about our mistakes…

But, you know, the Chernobyl disaster in 1986 was one of the most influential happenings from last century, with exception of both world wars and the passing away of Euronymous. Nothing else happened…

Now I will surely focus on conscious matter, and that’s quite impressing. Recently, I got in touch with a Belarussian damsel, who actually was known before (and still is) as visual artist: Olga Kann. This lady might be known for her (great) artwork for bands like Engraving Infinity, Dwellstorm Borned or Monumentum Damnati (for which I will write and publish a review soon about their latest release). But she recently started her own outfit under the Cryo Depth moniker (I like that name) as a way to transfer her inner world to sounds. As Cryo Depth, Olga did record two impressing things recently, the EP Alarm Call 1986 and the two-tracker Monolith. This review deals with that EP.

The introduction of this review, about Chernobyl, is like a brainchild of this lady. It was the worst tragedy in ‘the late present’ for sure, and it did have severe consequences for the whole of Europe, and for Olga’s home country more specifically. Chernobyl, as you might know, is enormously close to the Belarusian border, and Belarus suffered a lot from the effects. Olga canalised her ideas, thoughts, and feelings, into one huge sonic experience, to reminds us of our so-called superior limitations.

Alarm Call 1986 indeed refers to that fatal day in Spring 1986, when our ignorant worlds still felt like being immortal, indestructible, infallible. This artist does it via her self-explored and self-thought way, combining elements from different angles, all somehow related: Drone, Noise, Ambient, you know.

Actually, this one-track EP, which lasts for eighteen minutes and something, is like an enormously heavy soundtrack, somehow ‘cosmic’ in sound, claustrophobic and oppressive, yet also mesmerizing and intoxicating. Alarm Call 1986 stands for a long-stretched and multi-layered sonorous experience (or is it ‘sonic experiment’?), created though many levels of synth manipulation, found sound sources and keyboard treatment. There is a permanent evolution, resulting in a huge diversification of sounds and noises. A very important aspect is the use of many samples (phone call recordings, voices and field recordings from different sources), which are all taken from that disastrous day in late April 1986 (exactly thirty-four years before this release).

It is not easy to put a specific mark on the style. Actually, it does not matter. In her biography, Olga refers to ‘genres as Dark Ambient, Noise, Drone with horror and space influences’. That surely fits. Psybient, Cosmic Drone, Electroacoustic Music, Astral Ambient, it’s all part of the deal, I guess. The most important thing, however, is that the result works quite well. The whole is very rich and fertile, and each listen reveals details and aspects you didn’t notice before. But it is not a chaotic mish-mash – and that’s a good thing; on the contrary, the focus on the concept remains the spine of this aural venture.

Several excerpts seem to repeat themselves, but each time there are subtly interwoven details that enrich the listening experience. The whole of the time, it does sound heavy-weighted, harsh and menacing, sometimes even in an asphyxiating or paralyzing manner. Yet still it does not resemble like a depressing or doomed thing, yet rather focusing on awareness, consciousness and penance.

Oh yes, the video clip too has been created and directed by Olga. For the link, see below.