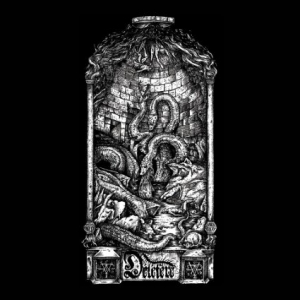 I have always expressed my appreciation for the Quebecois scene, the French-speaking part in the East of Canada. I will not make a list of cool bands from out there, but be sure that this area brought for some of the better (Black) Metal acts from the whole of America.

This counts as well for Délétère, a duo from the capital city Québec, involved with acts like Angstorm, Valknacht or Monarque. They recently recorded their full length debut Les Heures De La Peste, which I will review very soon. But their label, the fantastic Montreal-based Sepulchral Productions, decided to collect both demos Atheos and Thorleïf did, Inopia Et Morbo (2012) and Sacrificium Necrothytum (2013), under the working title De Retibus Morbiferis – Demo Compendium, both of them originally released via the defunct label Les Productions Hérétiques.

I hadn’t listened to the demos before, I have to admit, but they do, well, what can I say. Let’s start with the introduction of the first demo, called Credo. This is a composition that goes so far, so deep, so deeply brain-penetrating, and it isn’t but an introduction to what this band actually stands for. As from Une Lampée De Ciguë, Délétère bring a fast, fierce, rhythmic and up-tempo form of rather Traditional Black Metal, yet with that subtle Quebecois angle, concentrating on obscurity, majesty, epic and dreamlike atmospheres. The melodic, somewhat long-stretched and repetitive structures include quite some changes in speed (indeed with inclusion of several malignant outbursts), joined by traditional yet powerful grunting black-screams and pounding riffing. There is no doubt that the Second Wave-era, and especially the period after the origins (more specific: the late nineties) did influence the execution and sound quite a lot. And when talking about that sound, well, for a demonstrational production these two demos are way beyond average. Listen to those great bass patterns, prominent drum structures and fabulous guitar riffs; it’s quite remarkable how cool the mix of this material does sound, and this without losing itself in pathetic over-production.

One of this duo’s strengths is the total experience, for each single track isn’t just one or another bleak effort. No, every single composition, and I do really mean ‘every single one’, has such fantastic approach, with quite some variation (which includes mystic introductions, for example), with unexpected and, then again, rather evident changes in tempo too, and much more. But, believe me, throughout the whole journey, the grimness and bleakness remain as profoundly present as, well, as it is used to be, not???! Quite ‘attractive’ is that this band known how to combine traditional, classical and, indeed, even somewhat predictive stuff (going for the main structures; and ‘prediction does not necessarily needs to be something negative!) with quite original, apart injections, like the intros or outros.

Both demonstrational recordings are comparable, at least when focusing on the blackened forces. However, the second one, with the Latin interpretation of Life’s Beauty, is much more rooted within the origins and sources of the North-Atlantic Second Wave tradition, while the first one includes much more of the Québec-rooted scene. Does it matter? No, of course not, because both of them are so familiarly related, about incestuously inter-penetrated. I do like the first one for its occult, sometimes even mystic approach, and the second one for its true and honest f*ck-off-attitude. But in both cases, and that’s something that returns in the Les Heures De La Peste album too, the combination of crafted melodies and epic brutality stands like an ironed and spiked fist (in some human body’s opening, but that’s something we try to avoid; let’s focus on the aural penetration of this nasty experience, all right???).