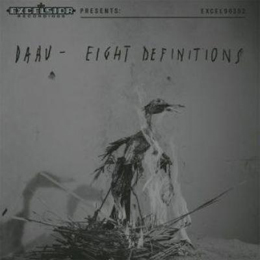 This Antwerp based band got together in 1992 but, unlike more the more Rock-geared acts of the town in that era (such as dEUS, A Beatband, and Moondog Junior...the latter later transforming into Zita Swoon), and somewhat in keeping with their band's name Die Anarchistische Abendunterhaltung proposed a slightly different filling of the evening, playing acoustic instrumentals for a kind of emotionally-laden Neo-Folk type of music. Over the years, several musicians came and went to reinforce the band's line-up (which currently consists of accordion player Roel Van Camp, clarinet player Han Stubbe, and upright bass player Hannes D'Hoine – the first two with the band from the start, the second since 2006) for longer [as in the case of band founders and cellist Simon Lenski (whom has moved to Berlin in recent years) and violinist Buni Lenski (whom left in 2006)] or limited periods, these including Adrian Lenski and Janek Kobalski (respectively piano and drums, from 2001 to 2002), Fré Madou (from 2004 to 2006), and Geert Budts (resp. upright bass and drums, from 2004 to 2006), and Angelique Willkie (vocals – period unkown).

On album recordings, the band also collaborated with An Pierlé, Ya Kid H (of Technotronic) and David Bovée (of Think Of One). The untitled 1994 album, released through the Jack & Johnny label (which also released debut albums by the aforementioned A Beatband and dEUS), attracted the attention of Sony Classical, who signed the band for their sophomore album We Need New Animals (released in 1998, it introduced the use of vocals, electronics, drums, and even guitar, in the band's sound), found out it was a commercial flop (in spite of the band's European tour with 16 Horsepower), and shifted the band to its sub-label Columbia Records. the latter went on to release the band's 2001 album Life Transmission, before sacking the band that same year. In spite of low sales, the album nevertheless got the band some radio airplay, as well as an extensive Benelux tour (for our non-European readers: “Benelux” covers the area of Belgium, Netherlands, and Luxembourg!), and spots at the Belgian Rock Werchter and Pukkelpop festivals.

2002 saw the band start up its own label Radical Duke, and release the EP Richard Of York Gave Battle In Vain (also known as Colours). In 2004 the guys released a compilation of outtakes and alternative versions, entitled Ghost Tracks, and that same year found the release of the new studio album Tub Gurnard Goodness...which included a cover of Radiohead's ”2+2=5”, and announced a return to the band's earlier sound. On tour (they played many shows in Germany, Czech Republic and France with Electro Dub crew Ez3kiel, and went on to play the renowned Sziget and Roskilde festivals in Hungary and Denmark respectively), the band expanded with the addition of a rhythm section. Meanwhile, driven by the band's name being somewhat of a tongue-trap, friends and fans had started to abbreviate that bandname to DAAU. 2006 saw the band release Domestic Wildlife, their first as a sextet...but shortly after the bassist left, and when the band returned with their 2010 album The Shepherd's Dream, it was again as a quartet.

Although in the 4 years since that last album, Simon Lenski left the band, he is still to be found in a guesting capacity on the new album, as is his brother Buni, whom is even heard on 5 of the 8 tracks. Han Stubbe confirms that the duo are still very much part of the DAAU family, will certainly guest on albums still to come and, possibilities given, will also be joining DAAU on stage occasionally. Another guest on the album, is drummer Steven Casiers (known from Dez Mona and Dans Dans), who will also be joining the remaining DAAU trio for live performances. The album is said to be somewhat minimalistic as compared to its predecessor, although one will still find a richness in details. Part of that musical shift, of course, has to do with the loss on one very important member, and with the fact that different methods were used to compose the new album, as compared to the 2010 one, which had spawned from jam improvisations, and still exhumed an atmosphere of escapism. For Eight Definitions, the band relied more on the individual input of the 3 remaining members, and therefore the music is more like a movie soundtrack with a positive message. As mentioned by the band, we live in dark times, and in stead of spiraling down in all the negativity, DAAU decided to go in against that, proposing that for every end of an era, there's also the beginning of a new one...which is why as album cover, the band chose for a phoenix rising from its ashes!

Well, in all frankness, the negative atmosphere in still present in the depressive mood of album opener “1992” ( a sample of which you might be able to hear at the band's page on your trusted online sales sites, I'm sure), but indeed the rest of the album is far more jolly and uplifting! At (www.) daau.be (more precisely in the “Audio/Album) section, you can listen to a full-length version of the album's track “Werkende Mieren” (second track on the album)...which does nót do justice to the album as a whole (because in fact, Eight Definitions is somewhat of a summation of the band's career), but already gives an inkling of insight (perhaps the older songs posted there will complete the picture somewhat...I haven't had time to check out during my research, you know?!). At any rate, for a quiet evening's filling, I certainly might think of putting on this album again in the future. I mean, those not really interested can consider DAAU as interesting background music, while the actual music fans will certainly be intrigued by the nice complexities. Yeah...I sure like this band!