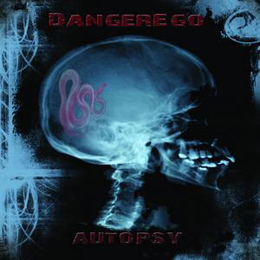 Although this Florence based Italian quintet only now sees its debut album released officially (they actually already self-released it in June, two years ago), the band was formed back in 2005!

Not, as you might think, with inexperienced members whom needed the time to grow as musicians & songwriters, because the guys had already been active in the Florence based acts Terrametèa, Bleff, and Florence New Grass). Still, the quintet (I'm not sure whether the current line-up of lead singer Flavio Angelini, guitarists Enrico Francesca & Lorenzo Giusti, bassist Claudio Zucchelli and drummer Massimiliano Innocenti was already composed that way at the band's inception) had echoes of Black Sabbath, Faith No More and Audioslave going through their minds when they first got together, and from there they slowly but surely paved their way with their own material, which they not only got to perform at some of the more prestigious stages in the Tuscani region, but also got the band respectable places in several band contests (including Lucca Summer Festival from 2007 to 2012, and at the Music W Festival). The guys managed to build up a positive live reputation which got 'em support gigs to some of the Italian Underground's more important acts (including Heike Has The Giggles, Calibro 36, Maniscalco Maldestro, El Thule, and Qube), and eventually even saw their music chosen as a background on the website of rising Italian Superbike champion Danilo Petrucci.

As mentioned in the first paragraph of this review, the band already self-released Autopsy in June of 2011, and it's in fact amazing that it took the band this long to find a label to release the album officially. Because the album contains all elements needed for an Italian band to break away from the strict confines of their homeland's borders : proper English vocals (without the usual Mediterranean accent) atop of music with nice catchy hooks and melodies, which finds elements taken from modern Psychedelic Hard Rock (say Stoner Rock) which they themselves describe as “...like Guns 'N' Roses driving around in a Cadillac in Palm Desert while David Coverdale wakes up listening to Alter Bridge”. Well, that's of course wishfull thinking for the most part, because the slightly nasal singer (whose range is in the mid-high octave) sounds like none of the above...and that's a good thing really, because it sets the band apart from the copycat scene!

The band has a website of its own (www.) dangerego.com, which I could not log onto (has it perhaps been deleted?), and they dó have a MySpace page (which I could not open due to those dudes having upgraded when a lot of the world still isn't! - in other words, you'll have to check what's available there). In my further search for possible posted music, I found nó facebook page for the band, but you càn listen to samples of all of the album's 11 tracks at (www.) cdbaby.com/cd/dangerego!