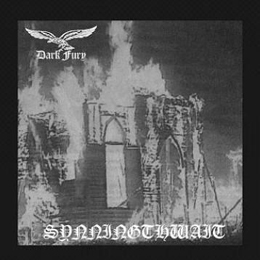 The Wroclaw, Poland-based band Dark Fury (not the Heavy Metal act with the prefix ‘the’) was formed in 1997 and has quite an impressive curriculum vitae. They are on Lower Silesian Stronghold for quite some period now (they were on the label when this one was still called True Underground Productions), and this eighth full length comes via the very same label. Since a couple of years, frontman Krzystof aka K. (who is / was active in bands / projects like Selbstmord (yet only as session collaborator, I think, despite the long co-operation), Popravči Vrch or Thoth as well; by the way, look out for the upcoming review on Popravči Vrch’s debut album, available on this site in a couple of, whatever, days, weeks, months, or millennia?) works with Kriegsminister P. and Njord, both of them also active in e.g. Winds Of Hyperborea and Flame Of War, amongst others.

Synningthwait consists of six tracks that last in between five and seven minutes (more or less). And praise the Horned One for the splendid succession of this stuff! The album goes on in the vein of W.A.R. or Saligia, with at least as much intensive persuasion and oppressive power. This kind of War-laden Ultra-Black is of a most majestic kind. Besides a great variation in speed (the songs vary from slow-tuned over mid-tempo to lightning fast), the sound is one of the many surpluses: massive, skull-crushing, yet decently mixed; I mean that every single detail has its own individual right to exist. The melodic structures are of a mostly genial-executed kind, without losing its perspective on power, persuasion, and victory! Polish Gründlichkeit, let’s say… And throughout the whole nasty experience, there is not one single moment of disappointment. It does not matter if you are into the likes of the Polish or the Norwegian / Swedish scene; there is quite a chance that you will f*cking like this Nordic-oriented (white) fist in the face of (any) godly entity. Listen to this material, enjoy it time after time, and make your own conclusion: aren’t we superior?!