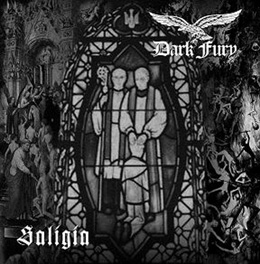 Last year I got in touch with Krzysztof, the guy behind The True Underground’s Lower Silesian Stronghold-label. This brother-in-arms offered us some material from his label, which I did, for the better part, truly like, such as: Celtic Dance, Wolftribe, the split with Enoid, Dizziness and Mortuus Caelum, and especially the newest Dark Fury-album Synningthwait (released on my birthday, so I consider it a mighty present!), amongst some others. All this stuff has been reviewed and published during late Summer and Autumn 2014 by undersigned; I’d like to refer to the higher mentioned Dark Fury-album especially, updated on July 21st 2014 (if you click on the label’s name on top of the review, you will easily get access to the other chronicles too, in case you’re interested – but why shouldn’t you anyway?). Recently, we did receive a new parcel with new material, and the stuff I did listen to in mean time (Geimhre, Xaos Oblivion, Lycanthropy and some more) sounds very, eh, inspirational once again. Watch out for the upcoming reviews in a very near future. In a couple of days / weeks / centuries I will focus on a ‘new’ Dark Fury-release too, the Carnivore-EP (a re-issue of older material on vinyl), but Krzysztof did include some ‘older’ Dark Fury-material as well. I do consider it a gift, yet I will take care of it too, for a couple of reasons: these recordings are worth it, and secondly, these recordings are worth it. Did I mention that they are worth being reviewed too? No, seriously, I will come back to some previously released Dark Fury recordings too, both because of the superior strength, as well as because of the renewed attention it deserves. And then, when going more deeply into this specific review, because Saligia has been re-issued in 2014.

Actually, this album was recorded and mixed in 2009 and initially released in 2010 on CD on June 1st 2010. There was a vinyl-edition via Frenteuropa Records exactly one year later, by the way. The stuff was registered at the Metal Zone Studio and lasts for thirty three minutes. And oh yes, the guy behind this project is called Raborym, but if I am not mistaken, it is no one else but Lower Silesian Stronghold’s Krzysztof, who is part of acts like Thor’s Hammer, Popravci Vrch, Selbstmord, Thoth or Poprava too, by the way.

Saligia consists of seven mid-lengthy tracks (about four to six minutes each, with a total running time of thirty three minutes), and it focuses on the greatness of the Catholic Church: the fabulous seven sins! I obey… The album even opens with church bells, haha.

Musically this piece of Blaspheme Art brings rather traditional, convincingly nineties-inspired mid-tempo Black Metal with a mostly raw edge, lots of variation in speed (from slow over mid-tempo to lighting fast), yet still maintaining a very imminent and inherent melodic structure. No, do not expect something renewing, because you won’t find anything ‘original’ right here. If that’s a problem, then just go to your local priest to complain. The ‘true’ fans will notice and appreciate the superb song writing and fine execution, the grandiose sound (totally rough-edged and unpolished, yet perfectly balanced when referring to the final mix; the way this kind of material should, or better: must sound like!), as well as the additional extras once in a while, such as the sampling (like the sad weeping and lustful moaning in Luxuria, or the sardonic laughter in Invidia), the decelerations as well as the blasting eruptions, the epic melodies, the surprising solos or leads, the fine, little variative voices, and so on. Anyway, as you might have guessed, this album is unheavenly recommended to every adept of trans-European Blaspheme Underground Black War Metal!