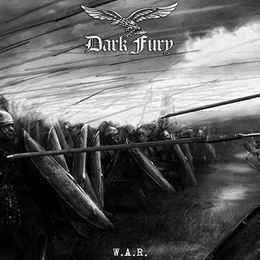 In quite an interesting parcel recently send to our headquarters, Lower Silesian Stronghold’s label owner Krzysztof included several Dark Fury-albums. Undersigned was quite ‘happy’, for I truly adored the album Synningthwait (check out the review on the update of July 21st 2014). Because Krzysztof included some ‘older’ recordings by this Polish horde (was it in order to thank me, or to promote his own band – but that is of no importance), I promised myself not to concentrate on the new releases by Lower Silesian Stronghold alone, yet to write a review on all former Dark Fury material as well. Consider it my appreciation for such glory (and because this material is way too cool not to focus on).

Anyway, on June 8th 2015 there was a first Dark Fury-update, dealing with the album Saligia, which actually is a re-issue, spawned onto Mater Terra once again in December last year. This specific review deals with W.A.R., which was the seventh album by the trio (at least, they still were a trio back then). And like the title suggests, this material deals with warlike themes: the urge and need to cleanse our lands from criminal filth. Dark Fury never eschewed explicit lyrics that deal with Arian stuff, so be warned!

Musically they are an aural expression of an iron fist in the face of (any) (monotheistic) god. The album collects great tracks that are melodious, emotional, oppressive, pounding, massive, rhythmic, atmospheric and epic in all aspects. There are pronounced hints of both the Nordic as well as the east-European scenes, with the Second wave-aspects gloriously strengthening the whole situation. Besides, the album has a production so raw and dry, lacking of cleanliness and modernism, yet focusing on the roughness and elementary aspects of this Music’s essence!