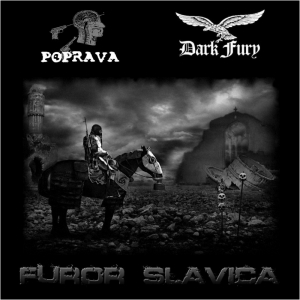 Ashes to ashes, dust to dust… Hail to purification, death to the inferior spawn of terrorist prophets!

Krzysztof aka K. of Lower Silesian Stronghold knows how to make me delighted: by sending me (new) material from his main band Dark Fury! Well, he recently did, so can you imagine that huge sardonic grin on my (pretty) face?... Indeed, I have never hided my appreciation for this Polish act; I wrote six or seven reviews before; enter this band’s name in ‘search’ and you’ll find out… This time the release is about a split with Poprava, a Czech band that also includes K. (on drums).

Dark Fury play a great kind of Black Metal, epic, proud and convinced, focusing on White Pride and our glorious past and heritage. The project was formed almost two decades ago (almost time to celebrate!) and released almost two hands of full lengths, several EP’s and different split recordings, with the likes of Pagan Hellfire, Ohtar, Martial or War, amongst several others.

On this split, they contribute with more of their glorious presence from the past. Inspired by the pagan elements from the Nordic scene, Dark Fury play that kind of Black Metal that pays tribute to everything I like, seen from aural point of listen. Okay, I admit that this isn’t but a personal, and therefor subjective, statement, but I am the reviewer right here, so this is my judgement. Anyway, purely objective, this band performs a timeless form of Black Metal, heavily inspired by the scene from the Nineties, with lots of tempo-changes and a grandiose equilibrium in between melody and aggression. They have an epic approach, comparable to the scenes from, let’s say, both Norway and Sweden as well as East-Europe – cf. that very same nineties’ era. As said, the whole is melodious in presence, but not necessarily plentifully guitar-based. As a matter of fact, the whole instrumentation is important, for it acts like a vivid organism, with individual aspects without whom the result would not be as attractive when one of such elements should be subservient to the rest. Of course, many excerpts are based on victorious and martial tremolo guitar leads (sometimes reminiscent, to my opinion, to Panchrysia, cf. some riffing on the opening track Masakra W Islaskiej Dzielnicy) or vengeful solos, but the pounding bass lines, heavy rhythm guitars and hammering drum patterns (extremely well-performed, both the fast, militant salvos as well as the inventive exemplars – listen for example to Bezlitosny Wojny Pan, and you’ll understand…) are at least as important for the total experience. And then I did not mention the sweet voice of K. His raw, even rusty timbre spits venom, hatred and disgust, yet in a well-thought, convinced manner – not like a dog trying to sound as malignant as a rabid werewolf. And to end with, a last word on the production. Well, the sound quality is, like always, decently unpolished, with a rawness that strengthens the band’s message. The mix is of a high quality, with all instruments finely balanced in result, yet still the whole maintains that grim rudeness. So, I cannot but conclude that my appreciation for this Polish act gets strengthened once again. RaHoWa!

Poprava (which means ‘love and peace’ in Czech; oops, I mean ‘execution’…) are totally different when talking about the sound and genre, yet their hatred is at least as prominent, deep-rooted and convinced. This four-piece was formed in 2011 and not that active (productive), yet they’re gaining a notorious name within the underground for sure.

They do not exactly play any kind of Nordic-inspired Black Metal, yet rather an old schooled form of ultra-filthy Black-edged Morbid Death Metal. Revenge, Conqueror, Sarcofago or even very early Darkthrone, you know, the Cromlech era, might have been a source of inspiration, I think. On Furor Slavica, Poprava bring fast and intense, hammering and provoking malignancy, based on somewhat simplistic (which does not come with a negative connotation!) rhythms and melodic structures, supported by an ultra-heavy rhythm section (with those artillery drum salvos, like an AK-47 taken the bit in one’s hand), deep growling grunts (and some occasional high-pitched screams) and a fine variation in melody and speed. Okay, the better part is quite intense, energetic and f*cked up, but some excerpts are remarkably slower, even melodious in performance. Here the sound is little messy, with a mixture that is shortcoming to the individual elements, and focusing too intensively on the drums – but hey, that isn’t but a minor detail, though an important objective one too, which you, dear reader, must take in consideration (or not, because it’s inferior to the overall quality).

Furor Slavica has become a killer-beast of a split. As always, Dark Fury are outstanding with their glorious blackened War Metal, and when it comes to Poprava, I think this might their best material to date (and believe me: I did certainly not dislike their full length Supredator at all). As said: ashes to ashes, dust to dust… Hail to purification, death to the inferior spawn of terrorist prophets! This is the soundtrack for elimination of the scum!