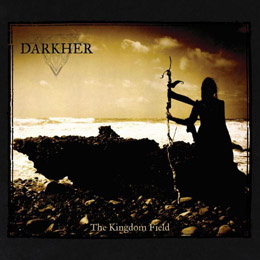 Jayn Hanna Wissenberg started the solo-outfit Darkher after she did put her former band The Steals on hiatus. She wrote and recorded three tracks that would eventually be self-released, untitled and in an edition of 100 copies only (I guess it was via her own Faun Records-label, which also released The Steals-material), but the stuff was too good to stay so extremely limited. So I am glad that Prophecy Productions re-issues this stuff (remixed and re-mastered), with a fourth track on top of the original three, under the The Kingdom Field-banner. The ‘Kingdom Field’ is an actual place, apparently, where Jayn finds inspiration, and that’s why she wrote that fourth song to honour that personal place of refuge and retreat; and eventually the title too has been chosen this way to pay tribute to that place of escapism. Escapism and raw emotions are, by the way, her main sources of inspiration when it comes to the lyrical side of Darkher.

The Kingdom Field lasts for twenty minutes and opens with Ghost Tears. It’s a slow track, starting off with tribal drums and hypnotic guitar riffs, soon joined by rhythm guitar play and additional percussion. After about one minute, Jayn’s unique, little evocative voice appears: not quite whispering, not quite singing either, yet in each case mystic, mesmerizing, fragile and still persuasive. It’s hypnotic Ambient, distant Post-Rock, soft-edged Drone, shamanistic Doom and Ethereal Music all in one. Listen to those experimental drum experiments, the gothic background, the Indie and Americana injections etc. This is unique, this is almost unheard before! Imagine Divine Circles and Coma Wall joining forces… Next comes Hung, basically based on emotional acoustic tunes, with the fairylike voice of Jayn once again carrying you away to distant worlds of mysticism and ethereal beauty. Towards the end there’s some noisy distortion, though very subtle, bringing back that droning element that makes Darkher a distinctive entity. Foregone is more powerful, with prominent drum patterns and storm clouds of guitar (cf. the bio). It’s permanently impending, but there’s no outburst, yet still this uncomfortable attitude sounds trusted and satisfactory. The Kingdom Field, finally, is an instrumental piece, based on acoustic guitars again, with eerie and floating guitar drones (sounding as if they were synth-mastered).

I am truly surprised, and charmed, by this project, and there must be some new material soon, I hope!