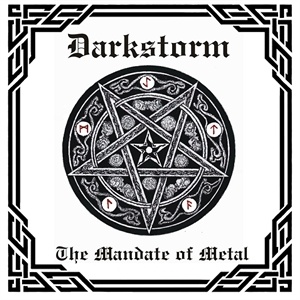 There was a Polish band called Darkstorm during the nineties, with a couple of demos that, back then, were quite appropriate to the scene. After the album / EP The Black Stone, however, the project ceased its activities. It was a pity, for there might have been a ‘future’ for this unholy horde. Apparently there was a return as Ravenlord Darkstorm (founding member Lord Darkstorm did not want to use the original moniker), yet that wasn’t but just a brief revival.

So, when I did receive this album from Jasper from The Ritual Productions, I thought it was another band with that very same moniker. Why not, for originality within band names is not always courtesy of our beloved Black Metal scene. But imagine the shock I underwent when I noticed that this Darkstorm indeed is the very same Darkstorm I used to follow more than two decades ago…

The question is: will I still be pleased after listening to The Mandate Of Metal? And I was afraid that I would not be. However, after three listens, I’m balancing in between ‘still craving for something that did not happen yet’ (but then again, wasn’t I expecting too much?) and ‘being satisfied for I actually got more than I did expect’. I know, I’m a troubled mind…

Well, The Mandate Of Metal, having a total running time of thirty-nine minutes, comprises of fourteen pieces that were recorded over a period of many years (Lord Darkstorm restarted his writing and recording activities again in 2010), and with inclusion of older stuff as well (i.e. stuff that was written a couple of centuries ago). That’s why there might be a lack of coherence in sound, but the ‘heart’ remains the same, evidently.

It (still) brings a rather primal and classic form of Black / Heavy / Speed Metal, based on repetitive guitar melodies, a simplistic yet efficient rhythm section, and vocals that hold the middle in between melodic and blackened. Damn, this is so nihilistic and primitive, and therefor ingenious! Sometimes a track thrashes and smashes, then again the approach is rather of the occult kind, f*cked-up speed-up, or melodious, aggressive-assaulting, paganised epic (!) or grim-blackened. But in (almost) any case it’s quite ‘fun’ (forgive me, Dark Lords from the Underworld for I did use this filthy word), and that’s not meant the mocking way.

Oh yes, the re-interpretation of the old track Night My Queen is my preferred one, in case you might be interested, for being the blackest and rawest one on this album. But once again, that isn’t but a personal opinion, yet since this is my review on The Mandate Of Metal, I am free to write whatever I want (except for infantile words like ‘fun’, of course – oops, I did it again…). The 2010 rehearsal tracks The Black Stone II (with sort of echoing-hysterical voices in the vein of the Count during the earliest years of (mighty) Burzum) and 666 too are fabulous blackened monsters that truly please undersigned (but actually this counts for about each single lullaby on this album).

And just for the integrality: this album consists of two ‘special’ ones too. It ends with a Deep Purple cover song, Black Night, initially done in 2002, and under the moniker Alone With The Emptyness, Darkstorm deliver a very ‘beautiful’ synth-based Ambient piece as well.

For fans of: Mercyful Fate, Venom, Destruction, Bathory, well, you got the (ugly) picture, don’t you?