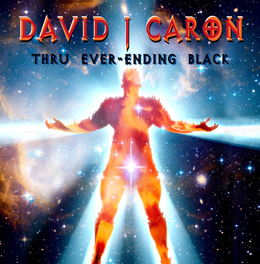 Sounds like a weird heading, isn't it? Well, there's a reason for that! You see, for some time now, the people at Casket Music/ Copro Records have changed their way of promoting their products, first distributing those in the UK, before unleashing the stuff outside the British isles and onto the rest of the world! But then, I dó think I said something similar in one of the reviews of a former package the label sent us. This one being the oldest release by the label, I will already reveal that reviews by the Italian Audiobreed, Denmark's Dreadlord, Turkey's Bigstake, and Italy's (or, is that Portugal's – the future will tell!) Luke Fortini are forthcoming, and will be posted as soon as ready (they're actually part f a priority job right now!).

Turning our attention back to the release at hand, David J Caron is an Irish/ Italian musician (grew up in England, and now resides in Ireland) whom immediately comes forward with a double CD album for his debut release, having composed and performed the music all on his own. Recordings and mixing were done at the Glasshouse Studio One over a period of 18 months, with David being helped out by co-producer Rob Mancini (now whére have I heard that name before?). But...just whom is this David J. Caron, after all? Well, turns out he's a completely blank page in Rock's history, the type of closet musician (main instrument being the guitar) who's never found a reason to come out with his ideas (some of which actually go back quite a way), and therefore shied away from ever joining a band. Over the years, he learned to play other instruments than just the guitar, and eventually he felt confidently enough to actually look out for the means to record his material. That it took him 18 month to do that, is mainly due to the fact that there were 27 songs for a total length of 2 hours and 36 minutes (and not, as stated in the biography at the label's website “28 tracks at a run time approximating three hours” – I mean, with the technology currently available, it's still impossible to get that much audio onto only two CD discs!).

If you'll believe the promotional talk at the label's site (which is taken from the artist's own site (www.) davidjcaron.com, by the way), David is the maker “...of Unique and Innovative Melodic Metamorphic Metaphoric Modern Progressive Heavy Hard Catchy Memorable Popular Rock Music that exists on a new dimension and approach, from the mainstream you've heard before...absent of the obvious stereo-typically expected over-used Rock clichées...”, and it should (label addition) please fans of the likes of Muse, Rush, AC/DC, Metallica, Coldplay, Nickelback, Billy Talent, Foreigner, Genesis, and Iron Maiden. Well, to that I simply hàve to react with the following : nowhere on the album will you hear any inclusion of Thrash rhythms (which is after all what Metallica, in spite of their commercial attitude, are supposed to be best known for), nor will you ever hear David go as Progressive as Rush, or as heavy/progressive as Iron Maiden, for that matter...nor as straight-forwardly Heavy Rockin' as AC/DC! What's left is a rather commercial type of Melodic Rock with occasional heavy flavouring, but...

Probably because of recording all of his material in a somewhat same-like mood (even with sessions dispersed over 18 months)...or because of finding a “perfect” sound for one specific track, and then sticking to that for the rest of the album...there's a feeling of uniformity throughout the album. True enough, there's a couple of songs which can best be seen as “ballads”, and there's even óne song (namely “So Let There Be Light”) which is stylistically heavier (mainly due to the fact that sings slightly different, with a lower pitch even), but overall the songs all sound like the other, with the same type of “heavy” rhythm guitar from which the sharpness has been shaven off, the same-sounding keyboards being brought in and, most importantly, the same type of vocal stylings being done! Yep, David has that typical slightly high-pitched voice that a lot of Heavy Rock bands of the '80s would've been envious of, and which would've been typified as “high quality” in those days. So, what's my beef against all of that? Well, it's just that the whole thing is só darn polished that any potential sharpness is cut out of the equation (to put things in the same words as used in the info, “guitar solos are a powerful and memorable tune-ful inclusion when needed, designed to be as much an equal part of the track as all else in it, and not just an interval from the song in order to include the ever-present commonplace Rock song necessity” - in my mind, it's where David went wrong, choosing for commerciability over pure Rock feel), while in the “ballads” the guitar work present comes to be at a same level as in the “heavier” songs. I'm not sure whether I explain myself as I should, but what I mean to say is that, in the end, everything is pulled to a same, smoothly polished level...and too much of a “good” thing tends to work, not boring, but annoying on this one person!

Well, maybe I've seen it all too much, and perhaps I've become somewhat too demanding over time (have I?, I thought I'd become more eclectic and receptive?), and I'm sure there's plenty of people out there who'll appreciate what David brings here. To find out how yoù feel about his music, check out the “Music” section at his own website (already mentioned above), where you can find no less than 33 songs (2 of which as mere samples), including the complete album, and a couple of songs David has already composed and recorded for a sophomore album (actually, he's already combined those new songs with some off the album for an online album which he dubbed 9 Singles). For those needing visuals as well as audio, David turns out to be a prolific video-maker, and no less than 39 music clips can be found in the “Video” section (connects to YouTube). There's also a possibility to download a couple of free mp3s, in case you're interested, and apparently David also makes an instrumental version of his debut album available! AS for my own end conclusion, I have to admit that all of this is not only well though-out and performed accordingly, but to my own taste it's all too smooth...obviously that weighs in the rating, eh?!