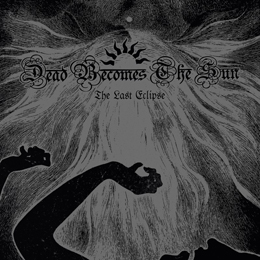 Dead Becomes The Sun are a solo-outfit by Frenchman Nahash, brought to life in 2012. His sole creation (until now) under this project-moniker is The Last Eclipse, an EP / MCD with a total running time of nineteen minutes. It was released via one of Belgium’s most notorious (Black Metal) labels, Immortal Frost Productions, and it is limited to an edition of three hundred copies only.

The Last Eclipse opens with Fear The Light, an extremely grim and eerie blackish piece. It is, I think, way too short with its one single minute of length, but it gives you the perfect idea of what Dead Becomes The Sun stand for. This material brings the kind of Black Aural Art heavily inspired by the so-called Second Wave, yet with an own interpretation of the classic school. It combines haunting yet melodic leads, extremely raspy, sulphur-rotten screams, lovely melodic parts, a heavy-as-f*ck rhythm section, and even some unusual breaks and structures. There are elements from the Norwegian and Swedish scene for sure, but this material can’t just be defined as ‘Nordic-styled’, because the execution isn’t limited to the traditional components only. Actually, and I know that this might sound odd, Dead Becomes The Sun seeks for a symbiosis of creativity and tradition, and it works. The hammering blasts and epic leads cause a feeling of familiarity (damn, this sounds cheesy…) yet of a mostly uncomfortable way.

The sound is the only logical, and acceptable option: raw, lo-fi, unpolished. ‘Fans’ of this kind of sonic darkness cannot but hail this, because it is the only way to support, to strengthen, to enjoy this stuff.

A first point of critic: the drums, which too often sound like nothing but an artillery-fire. A second one: the main parts sound way too alike; there is not that much variety in between the better part of the songs. A third one: less than twenty minutes of duration; I want more, I want more!

Anyway, if you do like rough stuff in the vein of, let’s say, earlier Gorgoroth, Judas Iscariot, Abyssal Hate and the likes, then you will surely appreciate The Last Eclipse.