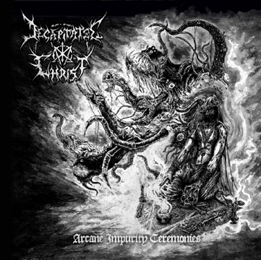 Decapitated Christ hail from Spain. They were formed as a trio (BlastHagel-d, Ghorth-g, and Lutt-b&v) in 2005 in order to pay tribute to the earliest nineties. The band wanted to create an old schooled form of Black, Thrash and Death Metal in general, honouring the likes of everything in between Slayer, Carnage, Impiety, Zyklon, Immolation, Obituary, Desultory, Possessed, Kreator, Morbid Angel, Sodom, Grave, Merciless, Sepultura and Bolt Thrower (limited reproduction of the band’s quasi-endless list of influences); you got the picture, don’t you?... In the beginning, the band struggled with some line-up problems, and they decided to put the band on hold for a while shortly after. Yet in 2008 Decapitated Christ reformed with some newly recruited musicians. The new blood and renewed energy delivered the audience a couple of full lengths as from then on: Antikristian Extreme Dekapitation (2008), The Vanishment And Extermination Of The Deities (2010), and The Perishing Of Lies (2013).

With Arcane Impurity Ceremonies, the band returns with their fourth full length, which lasts for almost forty minutes. Despite the huge list of influences, Decapitated Christ do not sound trendy, but indeed they know how to mix basic elements from (at least some of) the bands mentioned within the first paragraph [note: this album brings rather traditional Death Metal à la the Old School and stands miles away from the Black Metal scene, and at least some feet away from the Thrash-oriented genre]. Unfortunately it does not mean that Decapitated Christ reach the (sometimes superior) level of those bands, but a positive element is that, throughout the years, the band does not just copy the Old School scene anymore, just like that. It still does not mean that this album is original; no, these Spaniards haven’t created an own, distinctive sound, but since they do put a more self-created vision into their brutal songs, Arcane Impurity Ceremonies sounds stronger than before.

It makes me sad, but I do need to mention the dull sound (the whole rhythm section fades within a mushy pulp; the mixture focus too strongly on the grunts; the transition in between different parts is way too messy), as well as the lack of variety. One does not need to be the most creative entity to compose decent material (more than once exaggeration makes me nauseous), but some pieces are truly anti-inspiring.