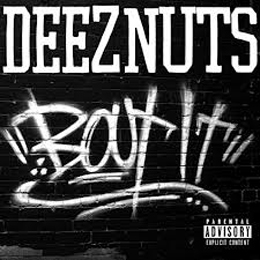 In 2005, one of the most influential metalcore bands, I Killed The Prom Queen, decided to call it quits. Drummer JJ Peters started killing time by writing new music and recording every single instrument himself. The result was the Rep Your Hood EP by the Australian hardcore band Deez Nuts.
Now, nearly six years later, they released their third full length, called Bout It! It's a real new chapter for the band as it's the first record released with a steady line-up: two Australians and two New Yorkers.
The record kicks in with the title track and it all sounds the way we know Deez Nuts the best: heavy guitars, pounding drums and the rap-influenced voice of JJ Peters. The Australians have never sounded more aggressive. Keep On could most likely be their most sincere hardcore song ever written. The subjects of the songs have also shifted quite a bit. Where they used to sing about girls and sex, it seems like they focus more on values such as friendship and respect. Give the two last songs True Colors and Band Of Brothers a listen for example. On this last song, you can witness the guest vocals by Architects' Sam Carter. Also Freddie Madball contributed on this record on the third song, Not A Face In The Crowd.

Deez Nuts will definitely convince more people of their greatness. They still walk their own path on Bout It and this is something they also make clear in the song Live Your Life. Don't miss them on their upcoming European tour during which they play the third day of Graspop Metal Meeting in Belgium.