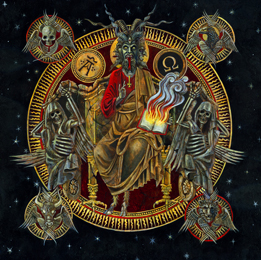 Hailing from the Philippines originally, Deiphago might be the oldest still-existing Extreme Metal combo from out there, yet one of the most unique ones as well. I do follow them since their earliest years, and with pleasure I notice their continuous evolution into nothing but all-the-same primitivity avant la lettre. I mean that they did start in order to pay tribute to ‘the old ones’ (i.e. Hellhammer, Morbid Angel, Bathory, Beherit, Sodom, Sarcofago, Blasphemy and the likes), and they haven’t changed since. Why not? Probably to satisfy my aural pleasures - thank you for doing so, sweet Unholy Trinity.

During the nineties, Deiphago recorded some demo tapes that, unfortunately, weren’t easy to find but through some underground tape trading. And it took until 2006 before this band, finally, released its debut studio album (Satanik Eon) - but it was worth waiting for! After some mini-releases (some released as split), 2010 was the Divine Year to release the second album (Filipino Antichrist; review posted after sonic orgasm by undersigned on 07/07/2010; check out the archives-section) and the very same label, Hells Headbangers just released the third Deiphago album (37:37), Satan Alpha Omega. Isn’t that sweet?...

Oh yes, there’s a Costa Rican part within the history which still goes on, but the wwweb will be pleased to help you out…

In the vein of the former efforts, Satan Alpha Omega brings blasting, noisy, devastating Grind-Black Metal whirlwinds, poisonous, sulphuric, post-nuclear and, at the same time, primitive in its purest form. This Black Sonic Chaos performed by Deiphago sounds even more aggressive and destructive than before, and such an intense experience is hard to handle, even for such a massive entity like me.

What I do disagree with, is the lack of variation this time. No, this band has never been ‘original’, nor did they add colourful keyboard lines, female choirs or progressive breaks whatsoever; I am afraid, this time, that it all sounds much too alike. It sounds like a messy mush, and unfortunately the low-budget production is not of any help.

Another remark: most pieces on Satan Alpha Omega do not ‘grab’ me. Before, I was always enjoying every single excerpt of any recording, but this time I do miss that specific ‘little more’. It’s like the guys weren’t really convinced, or inspired, during the recording sessions???

Not bad, yet little disappointing; better next time!