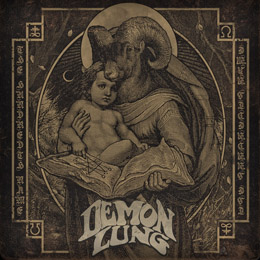 The Hundredth Name is the full length debut by Las Vegas-based band Demon Lung. This act was formed in 2011 and recorded an EP before, called Pareidolia. The Hundredth Name was recorded by members Jeremy Brenton (d), Shanda Fredrick (v), Phil Burns (g), and Patrick Warren (b), with recording assistance of Adam Myatt and Billy Anderson (who produced for bands like Dragged Into Sunlight, High On Fire, Swans, Neurosis, Cathedral and many, many more). The record lasts for fifty three minutes, for eight tracks, so the average duration is pretty lengthy. But in any case, each composition grabs your attention and interest. It’s not only the ‘female-fronted’ situation that makes this record so special - there are tens of Doom acts lately with a female vocalist in its ranks, and not all of them are really worth spending some of our sparse time (but Shanda for sure is one of the best singers in this genre, for she performs the rather esoteric, shamanistic way) - but this quartet brings material with a quality that impresses in almost each aspect. The opener Binding Of The Witch, for example, starts with almost five minutes of semi-noisy darkness, and the second half reveals a certain inspirational affection with Candlemass at the one hand, and Electric Wizard at the other (FYI: Demon Lung is a track by this psychedelic band, but that you probably knew…). Demon Lung do not bring Sixties / Seventies-oriented material, which is rather ‘common’ when dealing with a Doom band with a female vocalist. They rather dwell into spheres of occult, timeless Epic Doom, with a nostalgic element that, nevertheless, rather refers to the Eighties than any time before. The atmosphere is much more dense than most ‘female-fronted’ Doom acts, with horrific emotions in mind. One cannot deny the ‘traditional’ approach, lacking of any progressive or modernised addition (which I think is just great), but the whole is done with a sinister, almost demonic spirit, adding funereal, psychotropic, hypnotic and blaspheme themes into the whole concept, both lyrically, musically and sound-wise. Consider it a mystic symbiosis of Candlemass, Dark Castle, Castle, Black Sabbath, Electric Wizard, Cathedral, Trouble, Earth and The Wounded Kings, and you might have a clue what this great piece of Aural Art stands for. Or: superb and therefore very HIGHly recommended to every fan of Obscure Doom!