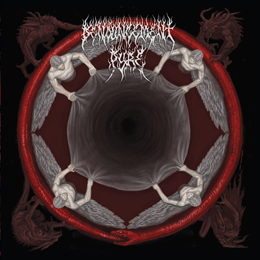 Australia’s Denouncement Pyre gave me another aural orgasm in 2010 with their debut full length World Cremation, released through Hells Headbangers (review posted on 07/07/2010 and still available on Concreteweb’s archives section).

In the very same vein, Almighty Arcanum (42:48 minutes) continues that path of sulphurous, venomous, poisonous Death/ Black grotesquery with an even more pronounced Luciferian atmosphere. The former album was much stronger than any effort done in the past (a couple of EP’s and one release on MCD, besides a live-album), but Almighty Arcanum for sure is the band’s most intense, professional and majestic album to date. It sounds even more epic and dark, nicely balancing in between primal underground-oriented substruction (including a lovely black-thrashing wall of sound; listen for example to the speed-up thrashing title track!) and interminable genus.

The energy is not unusual at all when it comes to similar acts from Down Under (Abyssal-Deep Down Under), but in this band’s case a surplus is, for sure, that brutally executed energetic drive in quasi-perfected balance with the melodic instrumentation and song structures. There is more diversity in between the hymns too in comparison to 2010’s debut full length. This goes for the tempo, the structural approach and the equilibrium of comparable genres (nicely interwoven with each other).

---> Total Darkness. Total Death. The unification of all that was, is, and will be: await Almighty Arcanum… <---