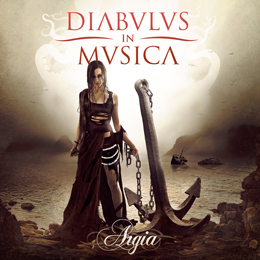 When I first put on this CD, at the opening track I thought I had put on a wrong CD, cause the opening could easily have served as music in the Lord Of The Ring movies.  But when the second track kicked in I knew it was the right album. What Diabulus In Musica brings us is symphonic metal with strong gothic influences.  Although they hail from Spain, I cannot detect in in the English vocals.  Basically this is almost a new band, since only the founding members Zuberoa Aznarez and Gorka Elsa have remained.

The voice of miss Aznarez at times is almost angelic, and is counterbalanced in some songs by harsher grunting male vocals.  Most of the songs are in English, but there are also tracks which se sings in Spanish, like the fourth track ‘Furia De Libertad’. The musical elements in their music are the standard elements you need for this type of music, massive use of synths, and a very good use of them as well, in so far that at times I wondered if they didn’t enlist the help of a real orchestra. That backbone of the songs, i.e. the rhythm section cannot be complained about, very good drum work if you ask me, and the guitar parts are very good as well. This band delivers nothing new in the genre, but what they deliver offers some very good quality, so if you’re into this genre, this is definitely a recommended album.