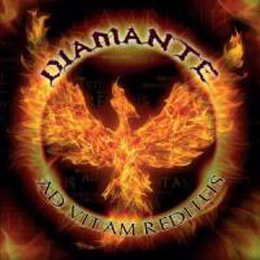 Following taking home the title of “Best Rock Record” at the Indie Music Channel Awards two years in a row, as well as wins in the categories “Best Young Rock Artist”, “Best Rock Recording”, “Best Music Video” for her single “Impossible”, and the coveted title of “Teen Artist Of The Year”, 17-year female Rocker Diamante (who's just this year exploded onto the Rock scene in Hollywood), is NOT what this review is about!

Heheh...no, the band known as Diamante we want to attract your attention to, comes from the Brescia province of Italy, where the quartet was founded as far back as 1994, and this happened through the merging of the remains of two bands. From the start, the guys set out to write and play their own songs, using the musical templates of, on the one hand, such Classic Rock acts as Gentle Giant, Deep Purple and Uriah Heep and, on the other hand, the more progressive tone of Italian acts such as Area, Biglietto Per L'Inferno, Il Roverso Della Madaglia and Locanda Delle Fate, bringing also the songs in their native tongue.

If the band's initial progress was a bit slow, it was because there was sóme instability within the band, but that changed in 1998, when Nico Sala (lead vocals and bass) joined guitarist/ backing singer Michele Spinoni, drummer/ backing singer Claudio Alloisio, and the band's original keyboardist Nicola. In fact, already in 2000 the band is found in the studio, recording their debut album Riflesso, and album which was very satisfying for the band as far as the recording experience and its results are concerned, soundwize...but which left the band unsatisfied as far as the catchiness of the material was concerned.

It caused within the band members a will to improve themselves and after years of study and practice, the guys record their second album, this time self-titled, in 2007. This time around, the album doés show the band as they feel themselves, characterized by a '70s sound, a light progressive shade, and a strong and catchy Hard Rock matrix! In 2011 however, the band's career is almost ended, when keyboardist Nicola dies (I've found no detail on that, though, in fact, even the fact of his death is described in somewhat cryptic terms in the band's bio). However, due to the support of friends and fans, and especially due to the persistence of Nicola's family, the remaining trio eventually take the decision to forge on, and continue with the band. And so Alan Garda (on Hammond organ, keyboards and backing vocals) is introduced in the band's fold.

As a tribute perhaps to their old organist, the band's includes two songs (“Respirare Te” and “La Ballate del Buon Vino”) which were originally written by Nicola, on this, their latest and third album. Then there's also 6 songs composed by the new line-up, and a cover of Angelo Branduardi's World Hit song “Ballo In Fa# Minore”. As mentioned above, the band sings in its native language, and the inclusion of such a cover (of course brought with a somewhat more Rock based tonality than the original version) is therefore not that strange...in fact, it fits in quite well with the rest of the material, which musically can be described as mostly resembling some of the more organic keyboard-drenched early '70 stuff by Purple and Heep...the song “Gloria” being the “ballad”-like (piano being played, as well as more atmospheric keyboards, and with less of that fierce Hammond organ overall). I have to say that, although Nico has a fairly good voice, he should refrain from trying to go to octave highs he cannot really master...not after some coaching by a professional, for sure! For some music by the band, I'm afraid you'll have to make due with what's available in the “Timeline” section of the band's page on facebook (www.) facebook.com/diamanterock (check posts on 30/10, 21/02 and 20/02 of this year).

End conclusion? Not bad, this diamond in the rough, and I for one am looking forward to a second album in the same line-up!