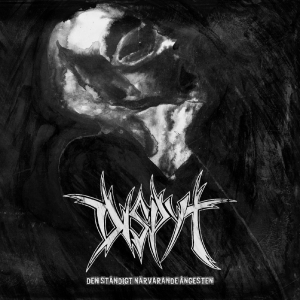 I do recognize the name Owe Inborr from two things. Firstly, he is the guy involved with two splendid notorious bands, Ondfødt (excellent grim Nordic-styled Black Metal) and Gangrened (ultimately heavy Doom-laden Sludge). The first one, Ondfødt, released two great full-length albums in the meantime, Hexkonst (May 2014) and Dödsrikets Kallelse (January 2019), both of them released via Immortal Frost Productions and reviewed by your humble servant (check it out if interested). Secondly, I know Owe as producer / engineer / mixer / master, involved with, besides his own bands, acts like Atra Vetosus, Azaghal, Wrathrone, Antzaat or Festerday (indeed, several of them also involved with Immortal Frost Productions).

Apparently, Owe (drums and vocals) did also start a new project, which is called Dispyt. He formed this band in 2016 with, initially, Philip Kerbs (guitars and vocals; you might know him from The Iniquity Descent; FYI: in the meantime, he left this band’s line-up). Very shortly after they got joined by Mathias Lillmåns (bass & vocals) and Juuso Englund (guitars & vocals) – both of them also involved with Ondfødt (the first one as guest, not as permanent member), and Mathias is also a colleague of Philip in The Iniquity Descent, and (currently or previously) active in many other combos, such as Finntroll, Chthonian, Twilight Moon or Magenta Harvest.

In November 2017, Dispyt (Swedish for ‘dispute’; despite the band name (and other band names) and the titles, the band hails from the city of Pietarsaari or Jakobstad, in Suomi, Finland) released their debut album, called Den Ständigt Närvarande Ångesten, independently. It was a limited release, on both tape and compact disc, and digitally. Yet seen the professional relationship in between the members and the label (as said, Ondfødt is part of Immortal Frost Productions’ roster), label owner S. decided to have this stuff re-released (after remastering in December 2018 at Owe’s Wolfthrone Studio).

As you know, Immortal Frost Productions is a Black Metal label especially. But hey, yes, in the past there were some other genres involved too (think about released by Australasia, Nights Amore and Horizon, for example), and that is why I was not that incredibly surprised when listening to this album. Here’s why. This ain’t no Black Metal either…

Well, actually, this combo performs a symbiosis of Punk and Crust, veiled in a grooving up-tempo manner and injected with prominent and important details from Sludge, Hardcore and Post-Hardcore. It does not mean that the stuff has nothing to do with Black Metal, for some riffs, structures and atmosphere-excerpts are as bleak, coil-black and oppressive as many BM-acts. Yet the main focus lies on harsh, energetic and speed-up Punk-Crust and Crust-Punk; sort of an incestuous bastard child of Skitsystem, Raw Peace, Protestant, Darkthrone, The Exploited, Impaled Nazarene, Artemis, Conflict and Dodsferd. I know, this is a wide range, but you’ll understand it when delving deep into Dispyt’s Den Ständigt Närvarande Ångesten. Elements from D-Beat and Grindcore, Thrash’n’Roll and Groove too pass the revue, yet all this gets canalised into quite an organic totality.

The main tempo is fast for the better part, with a few decelerating passages and quite some fierce outbursts. That contrast, or is it equilibrium, is enormously well-thought, for it does offer the audience that touch of recognition. I do not want to pretend that this combo is reinventing the wheel or hot water. But the variation in combination with a clear, and self-developed, identity, makes this band not ‘just another Crust act’. Personally I do appreciate the few more ‘sweet’ details too, like the semi-epic guitar solo at the end of Mest Bara Van or the deeply-blackened excerpts in several pisses, eh, pieces (and as Black Metal fan, this sort of makes me quite horny, hehe…).

Another surplus are the vocals, for their variety and strength. You have those soar Punk-laden yells and Hardcore-influenced shrieks, yet also some anthemic choir-like chants, raw growls, blackened grunts, high-pitched screams and much more. In combination with the variation in tempo and song structures, these vocals make the whole experience, once again, distinctive from ‘the average’, from the mid-range.

And then I have not mentioned the sound quality yet. Well, the better part, and then I am talking about the guitar sound especially, reminds me a lot of Carpathian Forest or Entombed’s glorious earlier years, with that devastating buzzing sound, that pounding heaviness. But the whole story is well-balanced, thanks to a grandiose mix. Drums, bass lines, rhythm and lead guitars, lead and backing vocals, the equilibrium is of a perfect level. On top of it, the sonic roughness and the lack of surgically clean over-production gives that subtle touch of timeless victory, that convinced erected middle finger towards the mainstream scene, that elegant ‘we do not care and you better do not either’ attitude. That’s what this kind of material stands for: a huge f***-off to trends and a convinced DIY mentality.