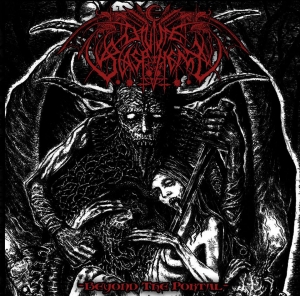 Divine Blasphemy are a new collaboration with current and former members from, for example, Diabolical Principles (the review on The Final Step Before The Dawn was updated on December 24th 2015), Mortuus Caelum (split Impetum In Tenebris: see November 10th 2014), Dizziness (split with Enoid and Mortuus Caelum, see former reference; new album Bound In Strength: February 7th 2016), Acrimonious (for a description on the Sunyata-album, check out the upload on February 14th 2013), and many more. In early Autumn 2014, Lower Silesian Stronghold released this band’s strictly limited demo-tape Plague Of Death, and now the trio (drummer Geegor, bass player Pyriflegethon, and guitarist / vocalist Gareth) return with their first full length studio release, Beyond The Portal, which has a total running time of one hour.

Beyond The Portal opens with the track I (actually, they’re called I up to IX), and as from the very first seconds it’s rather unclear: Divine Blasphemy aren’t divine, yet surely they are blasphemous! I brings fast, powerful, malignant and diabolical Thrash-edged Black Metal with that typifying Black’n’Roll vibe (not the punky direction, yet the Nordic / Teutonic current). Quite interesting is the fabulous variation within this song, with diverse tempo-changes, creativity in structure and so on, yet purely focusing on a same-minded, coherent result. Damn, this opener is a monument. The first time I listened to this album, I was anxious that it was a lucky shot, but it was not. But still I do truly adore the magnificence of this piece!

But I actually isn’t but the opener of a one-hour journey through dimensions of Epic / Thrash / Black / Evil Metal. With exception of one piece, every track lasts for more than six minutes, and with exception of not one single piece, every composition breathes grandeur and superiority. The well-balanced tempo-changes (more than once in a while a certain deceleration or blasting eruption is just beyond imagination), the fabulous lead melodies, the superb throat (also: mind the fabulous guest screams by no one else but Thou Art Lord / Soulskinner’s Gothmog on two pieces!), and so on, as well as the magisterial sound (see further) are canalised into a monument, a classic-to-be. There is so much to enjoy on Beyond The Portal, with quite a huge offer of details that, truly, fit. All compositions do have something ‘more’, being semi-acoustic intermezzi, harmonious leads, blaspheme outbursts, crafted solos, sudden breaks, suffocating decelerations or whatever.

In the former paragraph I mentioned to come back on the sound. Actually, this album was recorded in different studios, so it’s even more remarkable how the band did succeed to create such fabulous atmosphere and such convincing sound. It lacks of exaggeration, yet it exceeds cheap mixes of arrogant under-production too. The result is colossal and monumental in sound expression, and it surely empowers the magisterial epics.