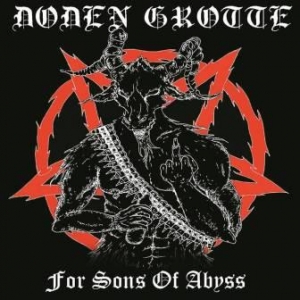 Doden Grotte are a pretty young project from the city of Astrakhan, not that far away from the Caspian Sea. They were formed in 2011 and did record two demonstrational recordings before. Now they (vocalist Iskariot, bass player Shoggoth, guitarist Qayin Bogomerzky, and drummer VT) compiled some material they did record as from 2013, the whole being (re) mastered and mixed in 2015 at the band’s home studio. Some tracks have been released before on the demos, some are previously unreleased, which makes this compilation quite interesting, at least if you can cope with this specific ear-molestation. Oh yes, it gets released via mighty (kult) label Cold Raw Records, and just for your futile information: there’s a tape-edition too in mean time, available via From The Dark Past.

For Sons Of Abyss brings somewhat chaotic, badly produced and minimalistic old styled Blaspheme Death / Thrash / Black / Speed Metal with an eighties approach / sound attitude and quite some Crust / Punk-elements. This material reeks of the most smelly dirtiness from (more than) three decades ago. Despite a total lack of originality, this band somehow succeeds to distinguish itself from the gray masses. For quite a big part this gets caused by a huge variation in between the different ‘songs’; the fourth piece, for example (any idea, anyone, what this song title might be; and why isn’t it ‘mentioned’ on the song list?), is a purest expression of Second Wave-laden (goat) Black Metal terror(ism), while a piece like Satan Devastation!!! comes with that violent Old School Punk feeling. The use, though extremely limited, of synths too has its advantage to the final appreciation.

Sometimes the primitive and primal approach might work bothering and contra-productive. Even a die-hard freak like undersigned needs to admit this. And the dull, under-mixed sound too is quite irritating (not going for all songs, yet at least for the better part, unfortunately): hollow drum patterns, the lack of qualitatively-hearable riffs etc.

Each release by Doden Grotte pays tribute to the international scene and this by means of covering songs from notorious bands from the scene (Mayhem, Archgoat, Behemoth, Lifelover, Absurd). This time there are three (and I have to say: well-played!) cover tracks, originally written and performed by respectively Beherit (The Gate Of Nanna), Hypothermia (Melankoli) and Burzum (Han Som Reiste); the latter in quite a surprising version (!) (up to you, dear listener, to find out whether you think it’s a successful approach, then again the opposite).

Can you imagine a mixture of Carnivore, Amebix, Venom, Necromantia (especially the bass lines, as well as some structures and vocal parts, cf. a song like Ceremony Of Creation or Bondage And Domination) and Heretic? Well, then you might have a slight idea of what to expect…