Down Among The Dead Men 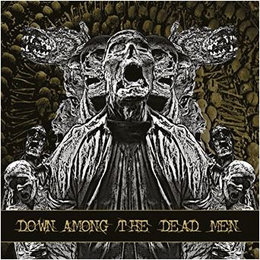 Down Among The Dead Men (question: named after the so-called The Lord Weird Slough Feg 2000-record, or the eighteenth-century John Dyer song; there are a couple of scriptures (i.e. books, novels, stories) too with this moniker, by the way) is a new project, which shamelessly can be labelled as ‘super-group’. Why? Because of the members. Down Among The Dead Men were formed by two extremely skilled and well-known Extreme Metal musicians (both of them wrote the music for this first album). First of all we have vocalist / lyricist Dave Ingram, who you do know, evidently, from his vocal duties in both the U.K. and Denmark. When it comes to the latter, Denmark, I would like to refer to Strangler and, especially, Downlord, and in the case of the United Kingdom acts like Benediction and Bolt Thrower are über-famous. The other member is no one else but multi-active guitarist Rogga Johansson – think Paganizer, Ribspreader, The Grotesquery, Bone Gnawer, Megascavenger, Carve, Demiurg and tens of other notorious acts. The latter did join forces with several well-known musicians in the past (Dan Swanö, Paul Speckmann, Kam Lee etc.), so why not with one of the strongest grunters from the U.K. for a change? The guys started working on material that, of course, holds the middle in between their huge curriculum, and when they started recording the stuff, they recruited a second string-master, Dennis Blomberg. Dennis is a close friend of Roger, and since Mr Johansson often works with musicians he worked with before, he didn’t hesitate to ask Dennis to be part of Down Among The Dead Men. You might recognise Dennis from his collaboration in, for example, Those Who Bring the Torture, Ribspreader and Paganizer, all bands Roger is involved with.

[FYI: the drum parts on this album were done by Erik Bevenrud, whom I did not know before. He acts as session musician and is not a permanent member. The future live shows will be taken care of by another Paganizer-disciple, Matte Fiebig, by the way.]

Down Among The Dead Men sort of mixes the rituals both main members are involved with. Of course one cannot deny the evident Swedish influence in almost the whole instrumental package (Rogga J.’s part of the package): so-called Swedeath-riffing, a low-tuned, nasty rhythm section, and an energy comparable to the trans-European Crust / Punk scene from the eighties. All this gets mingled with the unique, deep-throated and sulphuric-gurgling vocals by Dave. For his ‘voice’ is so specific, he gives an extra dimension to the whole, and it surely fits! Oh yes, it does. As a matter of fact, this collaboration might be one of the best where Rogga is or was involved with. His album with Paul Speckmann slightly disappointed me, but this co-operation turns out to be a topper! Therefor it is recommended to every fan of any of the members’ former or current bands, both Anglo-Saxon and Scandinavian. Besides, this material is much more varied than most Johansson-involved projects (going for both speed and atmosphere), which makes both the album and the ‘band’ called ‘down among the dead men’ craving for more.