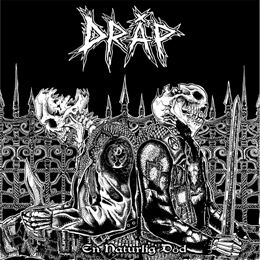 Since Xtreem Music did climb up to the ultimate top of the worldwide (Death) Metal scene since a couple of years (I can list up some hands full of fabulous albums that have been released by this Spanish label in 2013 and 2014), I am always excited when I receive or buy a new album via this label of David ‘Rotten’ Gonzalez. This time it’s Swedish combo Dråp I am referring to: not the defunct Black Metal commando, but a Grind / Crust / Hardcore four-man army from the northern city of Sundsvall.

They once appeared on the eighth volume of Turist I Tillvaron with one track (which, by the way, appears as bonus song on this album), and En Naturlig Dod is the first official full length, though ‘full’, well, actually it lasts for less than half an hour, so I’d rather call it a mini-album. But that’s a discussion of no importance…

En Naturlig Dod brings two hands full of relentless, crusty, grumpy and discordant pieces that sort of combine elements from primal Swedish Death Metal (hello Entombed), low-tuned Hardcore-Thrash (Driller Killer), raging and ravishing grinding Groovecore (the Afgrund-approach) and hammering d-beat-injected Post-Punk-Crust (Skitsystem and the likes). Other interferences might be the likes of Amebix, Discharge, Dishammer or E.N.T., and doesn’t that sound all right?

But a side-note must be made: there are some details that you have to take notice of, like the lack of outstanding tracks or excerpts, the ‘flat’ and superficial sound quality, the uninspired rhythms, and the incapacity to create an own face.

At the other hand, one must recognize the fabulous throat, the nice variation in speed, and the pounding energy too. The few guitar solos too are well-appreciated by undersigned, especially for reminding me to the skin-cutting (without anesthetics) sharpness of the eighties.