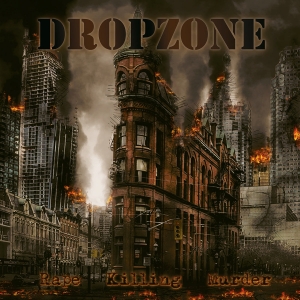 My passion (my wife doesn’t call it a passion yet rather an obsession – whatever…) for the extremest regions of Metal was born during the second half of the Eighties (shut up, I know I’m getting old). Back then, there were a couple of labels that were truly leading – many of them being defunct in mean time (or transformed into some gay Pop Music entity – no further comment). Anyway, at the very early nineties, one of those eminent labels, at least to my opinion, was Osmose Productions. They released Worship Him, which surely belongs to my all-time top-ten Black Metal albums (or top-whatever; I just adore that classic!), but they were home to recordings for other notorious acts too, such as Marduk, Enslaved, Necromantia, Impaled Nazarene, Absu, Rotting Christ, Immortal, Bewitched and so on. Unfortunately, but don’t ask me why, I sort of ‘lost’ them about ten – fifteen years ago, with just a limited number of albums I did buy from that French label.

So, I was quite excited when Nathan, taking care of the promotion for several (underground) labels (Blood Harvest Records, Svart Records, Iron Bonehead Productions, Nuclear War Now! Productions, Invictus Productions and many more), seemed to be involved with the support of Osmose Productions too. And a first acquaintance with the label is with a band I did not kwon yet, being Dropzone. Apparently, this Finnish horde was formed two decades ago by a bunch of beer-guzzling musicians, who named their band after some cheap American action motion picture.

Anyway, after twenty years of the band’s history, which I won’t go into the matter (because I don’t care), Osmose Productions re-release the 1996-recorded Dropzone Rape Killing Murder EP, which was recorded back then in one day (okay, with some rearrangements afterwards). At that moment, the EP did not get the attention it deserved (or might deserve), but Osmose’s Hervé has another idea about it. So here it is, finally, available for the masses.

Rape Killing Murder stands for a thrash-metallic form of Hardcore, injecting elements from Groovy Grindcore and Punk, and even Death / Thrash Metal, if you want. It’s like a Discharge – The Exploited hybrid (without the anarchistic propaganda), penetrated by elements from E.N.T., Venom, Dishammer and Bunker 66 (though some of them weren’t active back then yet – but I just want to give you an idea) – and why not to mention the likes of Amebix, Motörhead or Toxic Holocaust in a general and open-minded vision. Jaska’s vocals are of the soar-yelling kind, very Punk / Hardcore-oriented, with some additional f*cking growls and grunts. The bass riffs are quite progressive, even for being recorded last century, with a sound that is little funky, actually (the sound, I said, not the play itself!). The guitar melodies are often crossed by Speed / thrash solos, and professionally supported by truly devastating drum attacks.

Available on both CD and LP (and digital), so f*** or be f***! Old School Hardcore Metal with a bad mood and a brutal attitude, yeah, that’s what you’ll get…