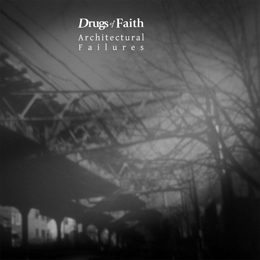 Drugs Of Faith are a trio from North Virginia that did surprise me with their 2011 full length Corroded. On Poland’s Selfmadegod Records, Drugs Of Faith delivered different other brutal sonic attacks, which were well received within the Grindcore-undergrounds all over our detesting globe. The band was formed ten years ago by Richard Johnson, whom you might know as well from bands like Enemy Soil or Agoraphobic Nosebleed. And now they return with a short four-tracker, which was recorded at Developing Nations with Kevin Bernsten (think: Ilsa, Inter Arma, Coke Bust, Full Of Hell etc.). And the mastering, by the way, was done by nobody else but Scott Hull, colleague in Enemy Soil and Agoraphobic Nosebleed, and known from his engineering and mastering duties for tens of extreme Metal / Grind bands.

Architectural Failures combines elements from Old School Punk, d-beated Grindcore, shredding Sludge, and thrashing (Death) Metal, with a rocking vibe and a crusty DIY-attitude. It sounds little grooving, but there is one thing I do not appreciate at all: the inferior, dissonant production. I have no problems with dissonance, as you might know (for being my eternal fans…), but this sounds way too messy. Oke, it does characterise this band’s approach, but only the hard core fan will ignore this (and even they will not…).