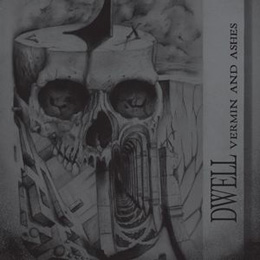 Well, sometimes surprises are great. And it has not always to do with renewing details or superb quality – though in this case both options I just mentioned are part of the greatness too. But it’s especially the style versus the label that did confuse me, albeit the positive way. I’ll explain why.

I’ve always been an adept of Hells Headbangers Records’ roster; there is no doubt about that. I think I wrote almost hundred reviews for this label in meantime, and I have never been disappointed, and from time to time even blown away completely. So, after a while, you can sort of recognize the stylistic landscape this label is focusing on. And here we come to my point of view. When listening to Dwell’s Vermin And Ashes, it was quite strange to realize this band is on Hells Headbangers Records’ roster. Normally we can expect some sleazy, nasty, primitive and / or barbaric form of Thrash / Speed / Death / Black / Heavy Metal with an old styled identity. Well, that old stylish attitude might come back when talking about Dwell. But it’s the opposite of nastiness and sleaziness that characterizes this band, and that makes me wonder why… No! I do not have a problem with that (at all), for the result is just superb (see further). But with this band, Hells Headbangers Records bring something that sort of explores new dimensions, trespassing borders they have been acting in for so many years. And no! once again for a possible shock-effect: it’s not that we’re now talking about something that is totally different. Vermin And Ashes does not stand for Hip Hop, Jazz, Pop Music or Gospel. It’s just, well, as mentioned before, less dirty, less sleazy, less ugly (yet at least as interesting and much more obscure).

Anyway, this quintet (including Cerekloth-members!) now releases a compilation which includes the tracks from the debut demo and some new pieces, all together clocking thirty seven minutes. The first track, A Collapse Sublime, brings very down-tuned and slow Morbid Death Metal with a prominent Old School vibe, but a first thing that strikes me are those fabulous leads that appear once in a while, the haunting melodies, the eerie keyboard lines at the background, and the additional blackened screams. Imagine my arousal… damn, there are plenty of classic elements to hear, but it’s impossible to put a mark on it. It’s not American, Swedish, German, Dutch, Panamese whatever; it’s everything and, at the same time, none of them either. Even the acoustic parts within the second part of this song are sublime, lifting this stuff up to dimensions of quasi-divine level. Then comes Pathless And Dormant, which is an Ambient / Industrial piece that stands miles away from Metal whatsoever. It is like an eerie soundscape, combining the oppressive atmospheres of some projects on Cyclic Law, Memento Mori (not the great Extreme Metal-oriented one, yet the -also great- Industrial label), or defunct Cold Meat Industry (amongst others), with some spacy and / or martial elements, and even a fabulous Black Industrial / ambient intermezzo that is at least as ominous and oppressive as some elegy the Horned One himself is whispering while taking a shower. Vermin In My Arteries then again is a mixture of old schooled Morbid Death Metal and black-faced Doom-Death (also from the old school), strongly based on highly technical melodies, fabulous leads and epic structures. Especially those leads rather remind me to the Atmospheric Black Metal trend we’re experiencing lately (with un-joy and un-pleasure!), little emotive, integer, black-gazing if you want to. Plunging Into Ash Tombs starts off as another industrialized piece with an ambient background, before turning into comparable spheres of grim and bleak Doom-Death emotions. And no, with ‘emotions’ I am not talking about those fake catchy, trendy or poppy nauseous pulp; but the smart ones amongst you were aware of that in mean time, I guess. It’s incredible how such fine-tuned, crafted leads / solos and straight-forward melodies / rhythms can create such doomed atmosphere. When the song suddenly explodes towards the end, this band’s craftsmanship once again gets lifted up to highlights way beyond mediocrity. Become The Void is a Dark Ambient composition with hints of the IDM-trend, yet without the danceable aspects. It’s little repetitive yet oh so pure, and somewhat the perfect introduction to the massive closer Perditions Mire. This song shows the fantastic cohesion of all instrumental collaborations, with a focus on marvelous bass lines, haunting guitar riffing, cool drum patterns and mostly vile screaming grunts. After several great songs, this last composition acts like the ultimate grande finale!

Isn’t there anything to destroy? Well, one might complain about the sound quality. Actually, a better mix would have created even more ‘waw’-bubbles in the mind, but that is inferior to the quality of the song writing and performance. I do not know if these guys are working on a ‘professional’ studio full length, but if they can improve the sound a little, in combination with the same skilled song writing and performance, their next opus might climb up unto my top-five end year’s list for sure.