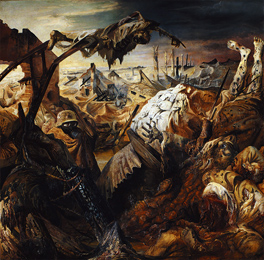 French act Eibon, with former members of e.g. Horrors Of The Black Museum, Garden Of Silence, Decline Of The I, Drowning or Colossus Of Destiny, return with their second album, once again for Aesthetic Death. And just for info: in the past they released some material on splits too, as well as an EP. Throughout almost one decade of existence, the band did permanently evolve, by growing into longer yet more technically executed creations, with this second full length being the most professional and ‘complete’ one to date.

II consists of two compositions only, but they last for forty three minutes (nineteen and twenty four minutes, respectively for The Void Settlers and Elements Of Doom). Besides, and I will come back to that later, each piece has been recorded in one take (live) in order to give this material that raw but, at the same time, organic sound.

Both tracks combine elements from Sludge (but then I’m referring to the most vile Post-Hardcore-oriented kind of the Sludge scene) and Black metal (seen the gigantic possibilities, I need to specify right here too: imagine the Necro / Post / War alike sub-currents), as well as War-Death, Doom, Drone, Stoner and Occult Dark Metal elements / influences… Damn, what a superior contrast in beauty and ugliness, in melody and distortion, in progression and tradition, in heaviness and melody, in structure and dissonance!

These Frenchmen are mostly capable to create ominous and oppressive walls of sounds with a timeless attitude. And despite the lengthy duration, both songs sound as if they are a sonic journey themselves, leaving no room for boredom, dullness or irritation. And like I mentioned in the second paragraph, this material was recorded in one single take. That’s just amazing! I can’t imagine how it might be possible to record such lengthy pieces all at once, with no failures (don’t you dare to complain about stupid details), in order to achieve such coherent result. But in one way or another, they succeeded to have more integer moments combined with bestial outbursts, yet without losing their focus on heaviness and, well, about everything I did add above.

Oh yes, I haven’t mentioned the physical conditions (Aesthetic Death did send me the physical copy instead of a digital one, so I can / may / will / dare not to ignore / forget / deny this): sublime! The cover painting is taken from a painting series by Otto Dix, apparently, though it might be one of his least-known creations. However, it might be fitting to what Eibon bring with their one-take stuff.

Life is war. War is pain. Pain is life. Anything else to add?...