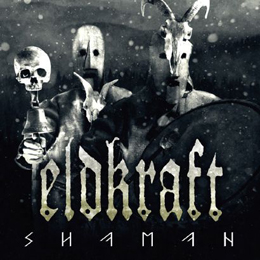 First impressions of Eldkraft will leave many metal heads bewildered and confused as they try to decide whether to stick with, this the band’s first album Shaman. Not because it’s a barrage of noise but because this isn’t exactly your run of the mill metal.

It’s a fairly epic mix of influences I am sure you’ll agree but it does take a couple of spins to get your head around this. I guess the pagan metal tag is the easiest to attach Eldkraft to but there are quite a few underlying spiritual shamanic ancient, ancestral mythological elements that creep in from time to time. Something that will be a matter of taste is the vocals of Sandin who in a few of his clean vocal parts sounds like Seigmen then reminds me of Enslaved and altogether definitely won’t be everybody’s thing, at the same time nicely differs from the majority of his metal colleagues. With all demand and because of all its originality, this album just has too little to offer me, also because I don't like this musical mixture of epic, pagan and power metal.