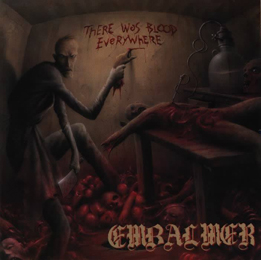 Embalmer were a sweet combo during the nineties, formed in 1989 and creators of a hand full of demonstrational sonic un-beauty. At the end of 1995, they released a 7”EP, There Was Blood Everywhere via Relapse. The very same label re-issued this stuff in June 1997 with inclusion of the Rotting Remains demo (1993). Then Embalmer did split up.

However, they reformed in 2005, with a first full length one year later, 13 Faces Of Death (via Pathos Productions), which included newly written as well as stuff from the early days. But that is another story. In 2012 Sevared Records released a 2-CD compilation with all material from the band’s first era of activity and some additional and previously unreleased ear-torturing pleasure, which also included the 7”EP and demo. But for one reason or another, Hells Headbangers are now to re-release the 1997-compilation originally done via Relapse, though this being done on vinyl (12”) this time. And that’s what this review will deal with.

There Was Blood Everywhere stands for filthy and uncompromising, slightly gore and perverse Grind / Death from the Old Skool. The ‘songs’ sort of collect slowed-down rhythms and blasting eruptions, both deep grunts and squealing screams, and primal, even simplistic yet highly maniacal structures. Of course the mix and production totally suck; it sounds even worse than my grandma’s final relief (bathroom pleasures guaranteed…) after ten days of constipation, but isn’t that the ideal way how this stuff must sound? It truly fits to the sick performance.

If you like early Carcass and Napalm Death, W.B.I., Agathocles or this kind of crap, then you must etc… But don’t forget the lazy sound quality…