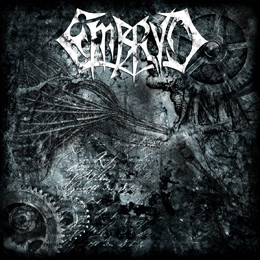 Italian act Embryo returns with a new album, which was recorded, mixed and mastered once again by long-time producer Simone Mularoni (you might know him as well from his assistance to bands like Vision Divine, Ravenscry, The Modern Age Slavery, Anatomy Of I, Stigma a.m.m.). It took quite some time, because their last album, the highly acclaimed No God Slave, dates from 2010, but the fans will not be disappointed. In mean time, the band recruited some new members, but this album was recorded with session / studio assistance on drums by Fleshgod Apocalypse’s Francesco Paoli.

Anyway, this third Embryo-album, which lasts for forty minutes, is even better than the former releases. With the album Embryo, these guys bring very intense and old styled Death Metal of a mostly melodic and atmospheric-symphonic kind. And that’s a rather fine result. Normally, bands with such synth-laden output, sound rather modern or even progressive. Embryo, however, perfectly know how to focus on tradition too. No, I won’t say that they translate the feelings of the Old School, because that would be an exaggeration. For sure there are many elements that sort of translate their modern touch too. And in this specific case there’s nothing wrong with that.

In general, the whole album comes with quite an organic attitude, despite the mechanical sound production, and that’s something adorable for sure. Also the great vocals (including the blackened screams) and fairy-like key-lines are surpluses. But I will not exaggerate either; it’s not that this band surpasses the likes of Ex Deo; but who can anyway. It’s like a bridge in between the late Nineties and the upcoming Twenties (silly joke, I know, but I’m trying to make a point, you see), canalized through both modernism and tradition. And you know: I do not dislike this result at all. You will not either.