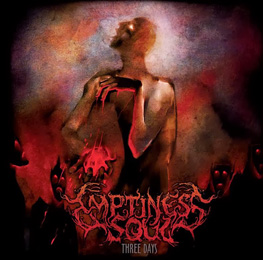 In my review for the new Lauxnos-album My Dead Ocean, I mentioned the sad burial of Emptiness Soul, a fabulous band that shares a member with Lauxnos (see update December 24th 2014). It is very sad to notice Emptiness Soul are no more. But anyway, Tim of Metallic Media was so kind to send the Three Days-album to us, which surely is an underestimated release, seen the strength of this Russian project. Actually, Three Days was originally released, though pretty limited, at the very end of 2012 via Satanarsa on CD-r, and also on tape in January 2013 via Depressive Illusions (though extremely limited too). A CD-re-release was effected in a more acceptable edition (of 1,000 copies) via Metallic Media, and that’s what we are all grateful for, aren’t we?

And just for utter joy: the band’s last album, Life = Pain, will be reviewed in the near future too.

Three Days was the fifth recording in quite a short time, and it consists of five pretty lengthy tracks (amongst which a Radogor-cover track). It opens with the introduction Expectation, which actually is a beautiful piano melody, assisted by melancholic, little emotive synth lines. Then comes the first day out of three, First Day - Birth, bringing a very unhappy mixture of Depressive Black Metal and Funeral Doom Metal. This song, and pretty much the same goes for the other ones, is built around dreamy tremolo leading melodies and abyssal-deep gurgling grunts. Damn, what a fabulous melody-lines have been created right here. Besides, the whole rhythm section (guitars, bass and drums) are enormously supportive, but not just additional at the background. And what is great too, is the mysterious outro at the end of this composition. Next comes Second Day - Perception, which goes pretty much on in the very same vein, but it sounds even more depressing and atmo-melancholic than the former song. It’s slightly more up-tempo – damn, I know that such statement is overestimated – but it’s an approach I want to clear up. Towards the end, there’s a semi-acoustic piece, which sounds truly nice, still maintaining the trem melodies that are basically the primal structure of the song. Also Third Day - Dying Soul is comparable: prominent melodious lead riffing and deep-throated grunts, with a harsh rhythm section. But this track might be the heaviest out of three. And damn, a specific lead reminds me to some track, and I can’t give it a place. But anyway, here too are semi-acoustic passages and something that sounds like xylophone (?) in the middle of the track, as well as little more variation, from structural point of view, than both other days. The album ends with the cover of Radogor, I’d Like To Love You. I’ve no idea how the original song sounds like, because it is almost impossible to find anything about this (Russian?) (one-man?) project, even on the net. But it’s a track that totally fits on this album.

The production is very decent; maybe even too clean, too polished. Some more roughness would please me more, but that isn’t but my personal opinion, of course. But all in all, if you like the taste of your own blood (carve and pink), then this is the ideal soundtrack to flow away into everlasting emptiness…