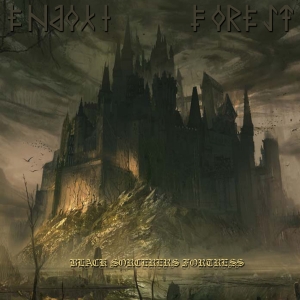 Several years ago, I came in touch with an American human being, who ran the Volk Lore Music collective. He was the same guy involved with several projects, especially solo-outfits, dwelling within the most obscure corners of the music(k)al spectrum. I wrote a couple of reviews for some of his projects (Visoteric, Herrenvolk, Endoki Forest), but then things faded away into silence. Until now…

Purely coincidentally, I sort of ‘discovered’ a very young label recently, Hyperborean Age Records. I recognized some of the project names on this label’s roster, and it did raise my heartbeat immediately! Stark Von Oben, Visoteric, Order Of The New Templars, Volk Lore, Endoki Forest… So, apparently John D. aka Loki started this new label to release (and re-release) stuff from different projects he’s involved with. You can expect some words created by undersigned soon about all of them, but let’s start with Black Sorcerers Fortress by Endoki Forest.

Just FYI, yet quite interesting, I think: Black Sorcerers was a label that existed for a very short period in the nineties, also led by Loki. You’re welcome…

Anyway, this recording was originally released in Autumn 2014, and now it got decently re-released to pleasure the dark souls’ ear drums exclusively. The result brings just over an hour of extremely oppressing, even suffocative yet, at the same time, sort of ‘beautiful’ Dark Ambient, yet quite unique in its genre.

Everything starts with Dominus Maximus, starting enormously tranquil and integer, yet soon thunder enters like a bomb shell. Hypnotic keyboard lines wave a thick web of oppressive and ominous nature, with this thunder returning the whole of the time. In addition to these mysterious waves of ambient grandeur, a very deep voice (1), shamanistically meditative, yet at the same time mischievous, adds  that great touch of hypnosis. And towards the end you also get those ethereal, almost ‘heavenly’ female voices, adding a dimension of dreamlike elegance.

Portal To Absuthulu shows a more ‘electronic’ side (no, do not expect some EBM-alike stuff right here!), with floating synth melodies, ritual frequencies and psychotropic tribalism. It accompanies the listener to dimensions both enlightened and obscured.

With The Stifling Air, a more noisy direction gets chosen. Here too, the harsh elements of nature (cf. storm winds, thunder, rain) are an additional element to accompany the eerie ritual soundscape. This piece is like a droning definition of an infernal vision to come. The fine thing is that, despite a repetitive character, the whole thing progresses the whole of the time.

Dajjal is the lengthiest piece (clocking over ten minutes) and it is highly interesting, for it is like the spine of the whole album. I mean that most elements that appear and reappear on Black Sorcerers Fortress are gathered right here: post-industrialised soundwaves, ritual invocations, hypnotic ambience, ethereal beauty, martial persuasion, and that great equilibrium in between an enlightening manifestation and obscure suppression. The ‘heavenly’ female voices reappear, joined by some haunting, distant and evocative voices. And like many pieces on the album, the finale trespasses any border or limitation of prediction. Fine…

Winter Soulstice (sic) brings another unique detail, being the involvement of electronic elements. The basics are still created around enchanting and captivating Dark Ambient in essence, but here the post-dimensional use of electronic devices (deep beats and trancelike echoes) add something unique once again (2). Yet despite this, the composition remains highly hypnotic and obfuscating.

Next comes The Labyrinth, which goes even further with these electronic influences. This piece is the most energetic one, quite militant and directive, combining several layers of floating synth majesty at the one hand with a vigorous temperament. Towards the end, by the way, Endoki Forest add several vocal elements, like these airy female chants, that deep semi-mantric voice and even Gregorian-alike choir-singing. Once again, the last excerpt differs, bringing an esoteric, and why not: astral (!) soundscape to dwell within.

Of Leviathan starts very biologizing, in some Lovecraftian manner. This track is industrialised in sound and structure, like a Baphometian adjuration. For some reason, to me it appears like an aural definition of some visual artwork by Giger. The mechanical background goes very well with the vile incantation-alike atmosphere.

The shortest composition, Pan, sounds integer and introvert at first, but actually the soft-symphonic and neo-classical melodies hide, and reveal, an enormously obscure and ominous secret. Once again, this piece differs from all others, yet it maintains the essential and recognizable core of the project. And purely informative, but here too the aforementioned female voices are represented.

I do adore every single track on this album, but my favourite one must be the last one, the title track. It is based on Erwachen (from the Herrenvolk outfit), a quite ‘old’ recording. Anyway, it gathers all elements from this album (cf. Dajjal), but it’s more. Black Sorcerers Fortress (the track, not the album) comes with a victorious vibe, for the martial aspects are so subtly represented. The drum patterns, for example, strengthen the glorious and militant attitude. The better part of the synth lines too have that victorious bravery that characterises the best Martial Industrial bands / projects, and then you have these grim and harsh propaganda-alike vocals… And as mentioned before, many pieces come with a specific, characteristic grande finale. Well, that’s not different right here, for this piece ends with such grandiose, all-conquering majesty and grandeur.

In conclusion I cannot but conclude: ave!