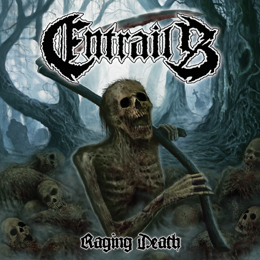 The origins of Swedish band EntrailS (not the one from the very same country, but hailing from the city of Avesta, at the North of Stockholm; ‘ours’ is the one from Linneryd, at the South of Sweden) go back to Winter 1990/1991. A couple of friends wanted to play Death Metal in the Sunlight-vein, but things didn’t seem to turn out very well. The members rehearsed a lot, but after some time, half of the quartet decided to quit to concentrate on other musical projects, and shortly after EntrailS were put to rest.

2008. Original member and band founder Jimmy Lundqvist found some old EntrailS-material and in a nostalgic mood, he decided to reform the band. Soon after, the material that was originally meant to be released as demo during the earliest nineties, was finally recorded properly as demonstrational material. Together with vocalist Jocke Svensson, he recorded a demo which was appropriately titled Reborn. The very same duo recorded a second demo at the very end of 2009, called Human Decay, and several labels started contacting Jimmy and his EntrailS-existence. When the band (Jimmy recruited a couple of other musicians to turn EntrailS into a ‘real’ band again) joined FDA Rekotz’ roster, the band was finally able to release a first full length, called Tales From The Morgue (2010). In 2011 the second full length was released (The Tomb Awaits, via FDA Rekotz in Europe and Dark Descent Records for the American market), and it didn’t take long before a major label showed up. A deal with Metal Blade took place soon after.

Jimmy started writing new material in his home studio, and when he and his ‘crew’ finished the first recordings during some sessions, the material was finally mixed and mastered by top-producer Dan Swanö. The result, a third album called Raging Death, lasts for just over three quarters of an hour and goes on in the vein of all former stuff. It means Stockholm-based Swedeath from the Old School, the kind of madness that turned me on more than two decades ago (and as a matter of fact, it still does). The overall sound comes very close to the origins from the Swedish scene at the end of the eighties or the earliest nineties (one exception: the production, of course, is simply better; we did evolve during more than twenty years of deadly terror, didn’t we?) and that’s one of the surpluses on this album. But the most important highlight is the quality of the material. Both former albums were of an exceptionally high quality, but when it comes to Raging Death, there’s no doubt that the former material was some lucky shot. Raging Death sounds like the protagonists, but it isn’t just a copy of any stuff from back then. No, Raging Death isn’t a reinterpretation of Like An Everflowing Stream, Left Hand Path or Into The Grave; it’s a self-constructed tribute to the likes of all this grotesquery. Each single track exhales that beautiful spirit from Old, but it certainly does not sound passé.