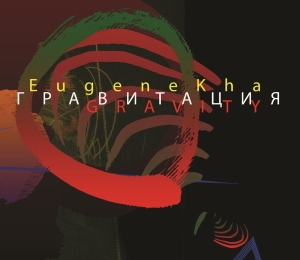 Sometimes it is almost an orgiastic pleasure to introduce an underestimated act, one that truly deserves deep-going fame. Okay, EugeneKha surely is a well-known name within its specific genre, and within the Russian Electronic / Ambient scene especially, but I wonder about his notoriety right here. I do follow this project for a couple of years, but this act has tens of releases, with several I have not got through yet. But what I listened to in the meantime was really satisfying, without any exception (live material included).

EugeneKha actually is the most active solo-outfit of multi-disciplined artist (dancer, poet, musician, visual artist, writer, journalist, editor, DJ and event organizer) Evgenij K. Kharitonov. This project creates ‘Intelligent Ambient Sounds’ with more than 150 releases under this specific moniker. Besides, Evgenij is involved in some other projects, such as Microbit Project, Spacebirds, Yoko Absorbing, Nameless Dancers and so on, but by far I prefer his EugeneKha outfit (my personal, and therefor subjective, opinion)! Evgenij, by the way, is the guy as well behind labels like 45 Echoes Sound (a largely underestimated Ambient label that houses artists like Jack Hertz, Christopher Alvarado, West Remi, Scott Lawlor and so on - indeed, some of the most prominent names have released material via this Russian label), Microbit-Records, 45RPM-Records, Laser Viza and Another Hemisphere. As (Rock) musician, Evgenij was active as from the Eighties, but his interest in Ambient and Electronic Music started at the very end of last century.

Грабитация, to be pronounced as ‘gravitatsiya’ or something, gets translated as ‘gravity’ on this album. Actually, it must be ‘gravitation’, but that’s just a minor detail. So I’ll continue with ‘gravity’…

Gravity is the xxxth EugeneKha album, a conceptual recording, and being, like stated on the Bandcamp-page of (superb and mighty) Frozen Light: ‘a fusion of meditative space ambient, progressive post-krautrock and dreamy synth-electronics’. Sounds somewhat trusted, does it not? It’s a double-CD with fourteen quite differing hardware-recorded studio tracks (especially Korg and Roland equipment were used) and two live pieces as bonus. Evgenij did record everything himself at the White Art Studio in Moscow. The result, both live pieces included, lasts for almost two hours (!)… 300 double-digipack copies have been pressed, being available hand-numbered, and with the whole visual aspect taken care of by Frozen Light trustee Olga Matveeva.

To keep it easy, I’ll name the album Gravity. Or is it because of laziness?... I will do the same for the tracks, if mentioned: using their English translation…

Gravity is a mixture of different related genres, but in this case, the organic symbioses has resulted in an own, new unnamed genre, courtesy of the artist. There are elements from Electronic Music, different types of Ambient (Ambient, Dark Ambient, Psybient), and hints from IDM (Intelligent Dance Music; mind the effects in e.g. Rhapsody), Psych-Electro (I just invented it, but why not?), Space Rock (without the guitars or the drums), Dark Electro (without the EBM-beats), Cinematic Drone and Ethnic. Besides, EugeneKha make use of some samples and sounds, tribal percussions (cf. Fading) and even female vocals (spoken words by Anna Guseva on the mesmerizing and semi-droning track Trust).

As said, there is quite some adventure to experience, but the global thing is one-directional. The main basics are based on soft, melodious and mindful Ambient-Electronic structures, without the harsh beats, yet full of psychedelic, cosmic and progressive sounds. Despite the ‘soft’ approach, it’s energetic for sure, yet not of the danceable kind (though, with your eyes closed, there is no reason not to turn slowly with your head – or any other part of the corpse). Let’s take the (short) opener Winds Of Mars (Part 1), for example. A hypnotic dark repetitive background line, varied yet well-balanced dreamy synth lines, some spacy interludes and the addition of different samples / sounds come together (maybe bizarre, but it does remind me of the interludes on Project Pitchfork’s Entities album). Saga then again, which is the next track, is comparable, yet rather seen from a New Age approach, and permanently injected with subtle spacy sounds. A first glimpse of the ethnic-oriental influential aspect appears in this track, by the way. There are both ‘lighter’ parts (the majority withholds that levitating character), often quite chill-out oriented, and some which are obviously darker (cf. Winds Of Mars (Part 2) or the title track, which comes, by the way, with a huge dose of Dungeon Synth alike majesty), and that equilibrium is excellent for it focuses on the whole experience of this lengthy album, rather than the individual efforts on it – you won’t lose interest or your attentiveness. With tracks like the esoteric, floating Noiseless Steps or the lengthy Tangerine Dreams-alike Crossroads, EugeneKha show a more intimate side, transcendental and meditative at first, and at the same time constantly building up to harsher proportions.

Both live pieces differ from the original studio recordings from this album, but hey, that’s okay of course. Geometry Of Light was recorded in St. Petersburg in early 2017, and it’s part of the Silent Tea Room session, which previously released via Evgenij’s 45 Echoes Sounds, if I’m not mistaken). This interpretation is a full, rich Drone / Ambient experience with many levels and layers, and a pity that it lasts for such a short time (5:44). The other live piece is a Moscow-recorded edition of Crossroads, offering much more ‘intensity’ and ‘bravery’ as from the beginning. Excellent en worthy bonus material it is indeed, terminating another fine and surprising Frozen Light release.