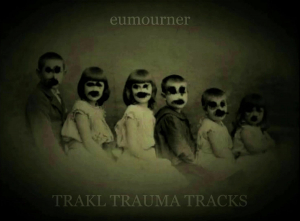 All roads lead to decay…

The story of Georg Trakl isn’t a jolly one. His youth was disastrous, and so was his professional life, though being forced. Georg was an expressionist artist (and scientist) from Austria (born in a time that European borders did differ from the current ones, for Hungary and Austria were like one sole country), with a youth that was not exactly that easy for a kid. Anyway, I guess you can find some biographical education on the net.

Of importance are the last moments of this guy’s life. Active as a supervisor in a medical division in Galicia during the earlier years of the first World War. And confronted with death, agony and hopelessness when taking care of tens of wounded, and dying, soldiers, Georg sort of lost his mind. He got locked up in a psychiatric infirmary (part of a Polish military hospital), where he committed suicide by an overdose of cocaine. Shortly before, he finished his ‘famous’ work Grodek.

Enter 2019. Eumourner are an Italian trio (nowadays: FLC, MV and GZP) that did record and release some highly interesting things in 2019 (and there is some material in 2020 too in the mean-time). You will surely find some interesting things on their Bandcamp page. At the very end of Autumn 2019, they released an album sort of dedicated to the dramatic story of Georg Trakl, called Trakl Trauma Tracks. That one got released independently, as well as via Distorted Void, a small but highly interesting upcoming label from the Russian Federation. It lasts for about three quarters of an hour and comes with quite disturbing cover artwork.

What you might hear (and I hope you dare to go that far) is a very weird yet scarifying, even claustrophobic mixture of Field Recordings, samples, Electroacoustic Music, ambient distortion, post-industrialised drones, psychotic electronics and Experimental Noise. Disturbing, you think? Indeed, that certainly is the case. But hey, it does simply fit to the embroiled theme, the delirium of war, the mania of trauma and mental processing. A cacophonic symphony of consciousness and reflection.

There are no ‘melodies’, nor is this recording a mish-mash of decoherent sounds either. Actually, the whole is like a brain-smashing experience, for the mingle of processed sounds, field-recorded noises, digital manipulations and sampled fragments, sort of defines a minimal yet, at the same time, cinematic and narrative (I would almost say ‘poetic’) grotesquery. And ‘grotesquery’ has not a pejoratively negative meaning right here. It is the ‘hugeness’, the colossal, monumental approach that I am referring too. This bleak atmosphere / sound goes in perfected equilibrium with that minimalistic, nihilistic, modest and integer execution. The collage, with vocal sampling, disturbing string distortion, synth experimentalism and surreal treatment, paints a dismal painting of mankind’s shortcoming. And it works well, for the result truly, and deeply, captivates, bewitches, intoxicates.

A remarkable element is the dynamism of this album. Trakl Trauma Tracks brings forth a collage of sounds and noises, as said, in a mostly so(m)ber way. It is not a sonic journey with highlights, outbursts or blasts whatever. Yet still there is a lot of excitement going on, if you take the time to dive deep underneath the surface. Because of the asphyxiating and hostile atmosphere, the message is so mighty, not-negligibly present and accurate. Such thing shows in its bleakest, most oppressive form in a piece like Track V. Landschaft, which features spoken word samples by Georg Trakl himself. In combination with hypnotic synths, samples from thunder, artillery fire and so much more, such thing simply overwhelms, it covers you in a poisonous mist of penance and subservience.